Josh Reynolds made his first-grade debut for the Canterbury-Bankstown Bulldogs in Round 11 of the 2011 season after progressing through the junior grades at Belmore. The versatile playmaker earned his selection after being named the NSW Cup Player of the Year in the season prior, and went on to feature in 10 matches for the Bulldogs that season — scoring four tries as he solidified himself as a consistent starter.

Moving in to the halves the following year, Reynolds steered the Bulldogs to the 2012 Grand Final against the Melbourne Storm — playing every game in the season and becoming the first Bulldogs five-eighth since Terry Lamb to score 10 or more tries in a season.

He would make his representative debut for New South Wales in 2013 in Game II of the series after featuring as an unused substitute in Game I, before finishing the season in the Prime Minister’s XIII team which defeated Papua New Guinea 50-10.

Reynolds again found himself in the representative arena in 2014 — playing for City in a thrilling 26-all draw — and helped the Blues end Queensland’s dominance in State of Origin, featuring at five-eighth in the series win. He also produced another strong season in club colours that saw the Bulldogs make their second Grand Final in the space of three years. However, it wasn’t to be for the blue and white in the end, with Reynolds’ Bulldogs going down 30-6 to the South Sydney Rabbitohs.

After missing selection for the Blues squad in 2015, Reynolds again took the Bulldogs deep in to the finals series with a thrilling field goal to win the game against the Dragons in their Elimination Final. Hasler’s side were eliminated the following week, however, against the Roosters.

Reynolds chalked up his 100th NRL game in 2016 that again saw the five-eighth feature in the finals for the Bulldogs, scoring eight tries from his 25 games, before playing 17 games the following year in what would be his final season in his childhood club.

Reynolds moved to Wests Tigers at the start of the 2018 season but suffered a hamstring injury in the final training run before Round 1 — ruling him out of his side’s stunning upset of the Sydney Roosters in the season opener. He would return in Round 6 against Manly-Warringah but suffered a shoulder injury in the win, ruling him out until the middle of the year. He came back again in Round 12 — coming off the bench to spark the side to a win over his old club at ANZ Stadium — and started at five-eighth soon after with Benji Marshall out injured.

However, his frustrating year would again be marred by injury with another shoulder injury seeing the five-eighth ruled out for the remainder of the season having played just five games for his new club.

After an extensive off-season rehabilitation program, Reynolds again battled through injures in 2019 but returned sporadically throughout the season to notch his 150th NRL game in the club's final game of the season at Leichhardt Oval.

Reynolds is signed through at Wests Tigers until the end of the 2021 season. 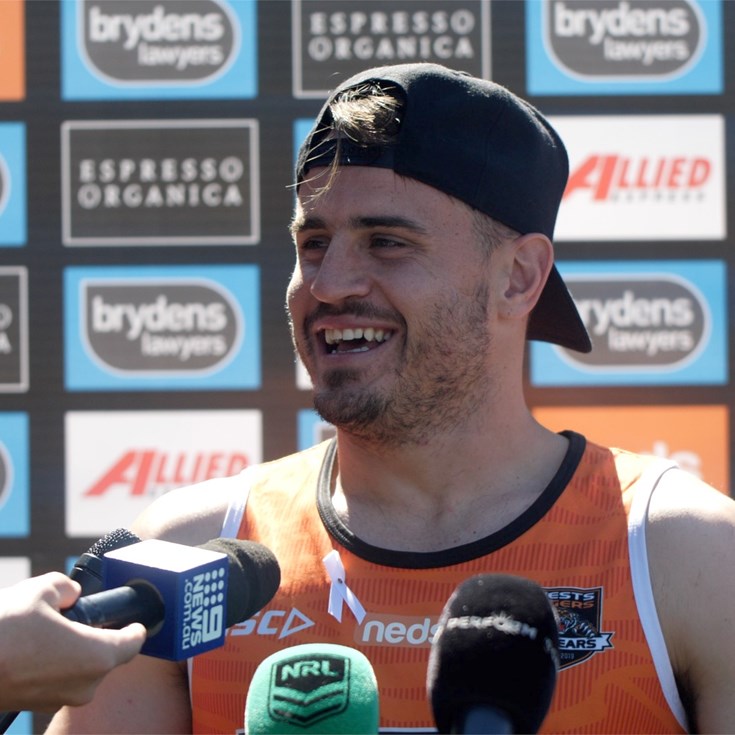