Having made his first-grade debut in 2016, Musgrove has played 27 NRL games for the South Sydney Rabbitohs and made his international debut for Samoa at the 2017 World Cup before injuries and suspension prevented him from any NRL action in 2018. He would initially sign with Wests Tigers ahead of the 2019 season, but his registration would not be conditionally approved until 2020. Having overcome that, Musgrove would play just six matches due to an unfortunate long-term foot injury that saw him sidelined until the penultimate round of the season. Musgrove is signed through at the club until the end of the 2024 season.

Musgrove ready to return against Newcastle 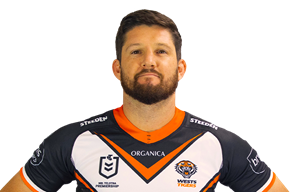