Wests Tigers have brought the magic to Brisbane with a 36-18 against the Newcastle Knights in the first of eight games at Suncorp Stadium.

From spectacular finishes in the corner to runaway tries and sideline conversions — Wests Tigers brought all the tricks to Magic Round, scoring six tries to four to record their third win of the season — their second in three weeks.

Coach Michael Maguire's decision to switch Moses Mbye to the halves and Adam Doueihi to the centres proved a masterstroke as Wests Tigers made it two wins from two games against the Knights in 2021.

The 18-point win was arguably the side's best performance of the season as they moved to within one win of the top eight.

It was a fast start for Wests Tigers as they raced out of the blocks to score the opening try within five minutes. Winger David Nofoaluma kept the ball alive with a late offload to Moses Mbye, who sent Tommy Talau through a gaping hole before Luke Brooks scored his first try of 2021.

Skipper James Tamou was next to score — his first in Wests Tigers colours — after he cleaned up an Adam Doueihi grubber kick for a 12-point lead after as many minutes.

They remained ahead of the clock when Nofoaluma pulled off a spectacular finish down the right following a Luke Brooks line-break earlier in the set, while Doueihi added the extras from the sideline for an 18-0 lead.

The Knights, however, were next to score as they hit back through Hymel Hunt, however the conversion was unsuccessful.

Experienced centre Joey Leilua thought he had his first ever try against the Knights — the only club he hasn’t scored against — however the Bunker intervened after a knock-on was spotted as he was attempting to ground the ball.

After the Knights conceded three-straight penalties, fullback Tex Hoy found himself in the sin bin and Wests Tigers took full advantage with Doueihi slicing through at centre for an 18-point lead.

Newcastle thought they had hit back following a Talau brain explosion when the young winger flick-passed the ball back to an opponent while trying to stay in the field of play, however luckily for Talau and Wests Tigers, the Bunker found a Knights knock-on.

Maguire’s men went up the other end and came back with a Doueihi penalty goal after a high tackle on hooker Jacob Liddle.

The Knights went up a gear following half-time with forward Brodie Jones scoring after just a minute.

However, Wests Tigers regained their advantage with half an hour remaining when Joey Leilua flicked the ball to his winger Talau to score in the corner.

Doueihi added six more points for the ‘home’ team as the Lebanon international bagged his second try and another conversion in the 53rd minute. 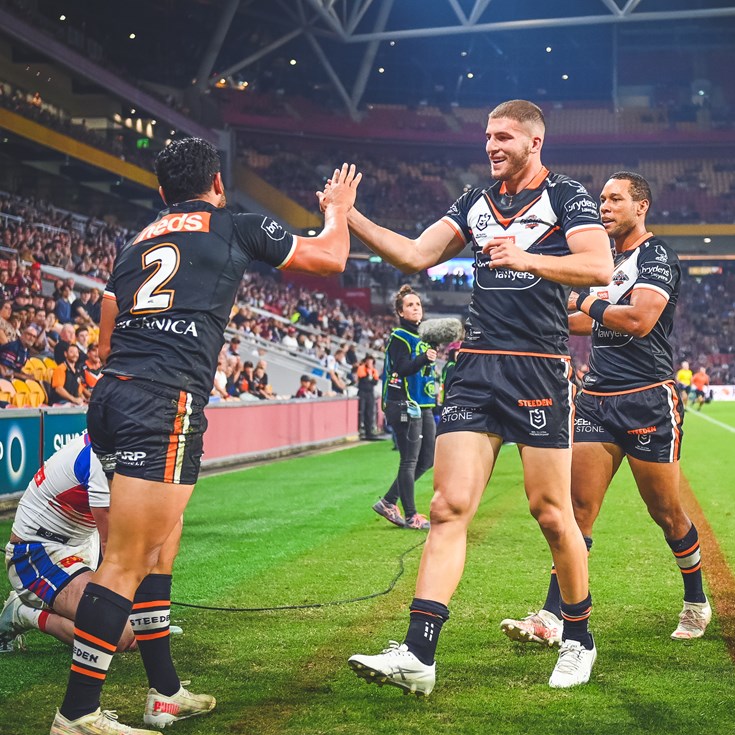