The Tiger Talk colum appears each Wednesday in the Campbelltown Advertiser newspaper.

'Injuries are part and parcel of the rugby league landscape.


Unfortunately for us at the Wests Tigers, we are certainly having our fair

share at the moment with three more quality and key players suffering injuries in our loss to the Brisbane Broncos at Campbelltown Sports Stadium last Saturday night.


Losing Tim Moltzen for the season to a knee injury is a real blow for the team, and in particular, to Moltz. I thought he was playing well at half-back in the lead up to the injury. It was shattering to see him so upset after the match after suffering the same injury in 2010. But knowing Moltz, he will work even harder this time around to make sure he is right for 2014.


Just when we thought things couldnt get any worse, we have lost centres Blake Ayshford and Chris Lawrence for up to six weeks each. Ayshford has an ankle injury and Lawrence has suffered a hamstring injury.


On top of this, we lost prop Matt Bell at training in the lead up to the Brisbane game with a tendon injury to his right hand. We are hoping he can be back by around round 14.


When you add these players to the injury list alongside the likes of Benji Marshall, Braith Anasta, Keith Galloway and Lote Tuqiri , it certainly makes the job tougher.


However, we wont be using this as an excuse. We will field 17 players against the Bulldogs at ANZ Stadium this Friday night and I know each player will again give their all for the club. We are fortunate that we have good depth this season and it is certainly being tested.


Just on the Broncos game, we got off to a slow start and it was not what we planned. We spoke before the game heavily about getting off a strong start and working hard on our defence but Justin Hodges certainly did some damage out wide.


We then muscled up more in defence before losing Lawrence. Fortunately, we were still in the match at half-time thanks to a good try to winger Matt Utai.


We came out more determined in the second half and I felt we did well to hold the Broncos at bay in the opening 10 minutes. They had several attempts at our line but our defence held firm. In the end, the injuries to the three boys proved too much. We may have been beaten but I can tell we were proud of the courage we showed and have taken plenty of confidence out of the game.


A big thank you those Wests Tigers supporters who came and cheered us on. The crowd of just over 11,000 certainly made plenty of noise and did help lift us.


As for this week, the Bulldogs will be another test for us. They will be confident after grabbing their second win of the season against Cronulla on Sunday at Bluetongue Stadium.


We all know they are a quality side and they have a few forwards set to return against us. Like I said before, we will field a team and we will go out there and give it our very best shot. No player likes to lose.


I hope to see plenty of Wests Tigers supporters in the crowd again. We really need your support right now.


Like I said before, the players will give it their all. We always do.' 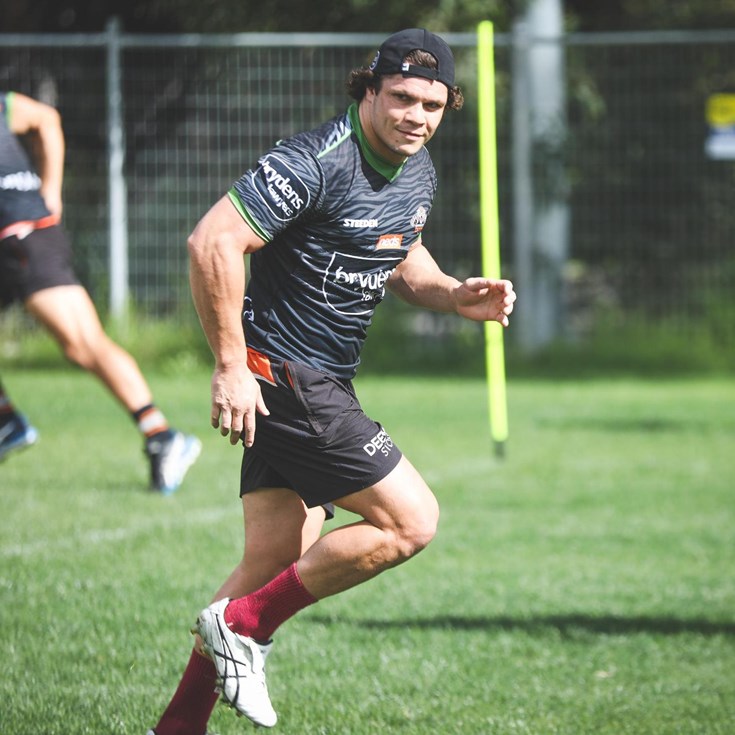 Jet flying back into the centres this week

Wests Tigers on board for Beanie for Brain Cancer Round!