Here’s our top five moments from the games 100 to 200 in Wests Tigers history.

Making his debut at just 17 years old — the youngest ever player in Wests Tigers history — Chris Lawrence’s first NRL game will go down as one of the most memorable in Club history. Sitting well outside the top eight coming into the match against the competition favourites, Wests Tigers ventured up to Lang Park and stunned the Broncos, pulling off a 20-6 victory thanks to tries from Dean Collis (2), Ben Jeffery and Lawrence himself. 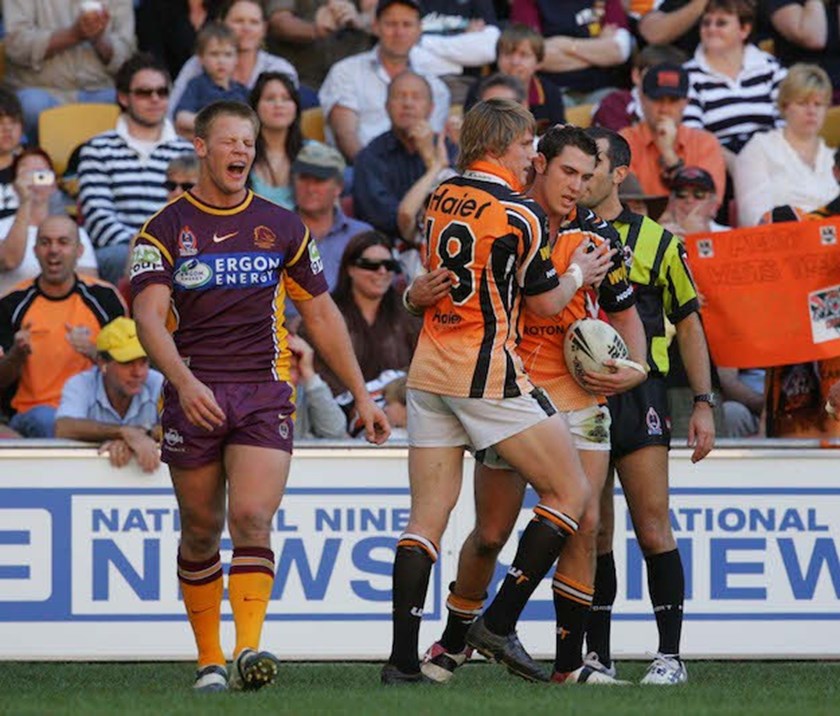 Coming into the match on the back of a five-game winning streak and a 46-6 demolition job on the Cronulla Sharks the week before, Wests Tigers made the trip down to the nation’s capital with plenty of reasons to be confident. However, they soon found themselves staring down a 14-0 deficit at half-time — leaving their now memorable winning streak in jeopardy. But thanks to a determined team effort, and tries to Brett Hodgson, Robbie Farah and Daniel Fitzhenry, Wests Tigers stormed back to emerge with a 22-14 victory in the end — giving them the confidence that they could indeed go all the way that year. It might not have been the glamorous result of others that season, but it showed the heart and fight that proved to be the difference for Wests Tigers in 2005. “Back and forth” simply doesn’t do justice in trying to describe Wests Tigers’ incredible Round 3 victory over Bulldogs in. Coming off the bye, and a tough Round 1 loss against Parramatta Eels, Wests Tigers reeled off five unanswered tries after going behind early, before letting the hosts fight back to level the match at 36-all with a minute to play. Enter Scott Prince, who stepped up to nail a match-winning field goal as the siren sounded to give Wests Tigers their first win of what would be a very special year. It was built up as a training run for the Dragons before they progressed to the Grand Final, but nobody seemingly told a confidence-inspired Wests Tigers side, who pulled off a stunning upset to book their place in the 2005 Grand Final with a 20-12 win. Despite several players forced to play out of position on the night, Wests Tigers produced a strong opening half to lead 16-6 at the break, before Halatau’s second try of the night sealed victory for Wests Tigers — putting them just one win away from the premiership. Was there ever going to be another #1 other than the 2005 Grand Final? From Benji Marshall’s flick pass to Pat Richards, to the determination shown in the second half not to let the Cowboys back into the match, it’s a game that will stick in the mind of Wests Tigers fans (and of course the players involved) forever. The pile of bodies after Todd Payten’s try in the final minute summed the night up perfectly — utter jubilation.

Gallery: Training heats up in January

Presented By EISS Super 2 days ago
26