Wests Tigers will be looking to end a string of four straight losses when they host the Melbourne Storm at Leichhardt Oval for a Sunday afternoon classic.

After going down to the Newcastle Knights in a tight affair last weekend, Jason Taylor’s side sit one win outside the top eight on four competition points and will be looking to maintain their strong record against the Storm when they clash this Sunday afternoon.

The home side will be without their captain Aaron Woods, who was ruled out for up to six weeks with an ankle injury sustained in the Knights’ loss. Tim Simona also remains suspended, with Nathan Milone again taking his place in the centre position.

Joel Edwards will make his Club debut as Player #191 for Wests Tigers, set to come off the bench with big man Ava Seumanufagai replacing Woods in the starting side.

Melbourne visit Leichhardt on the back of a six-point loss to Canterbury on Monday night, but still remain inside the top eight with four wins and two losses to start season 2016.

The visitors suffered a blow earlier in the week with Australian representative centre Will Chambers ruled out for 12 weeks with a fractured foot. A replacement is yet to be named for the match (potentially Richie Kennar), with both line-ups to be confirmed on Sunday at 3:00pm.

Be there for Sunday afternoon footy at Leichhardt Oval when we take on the Storm! 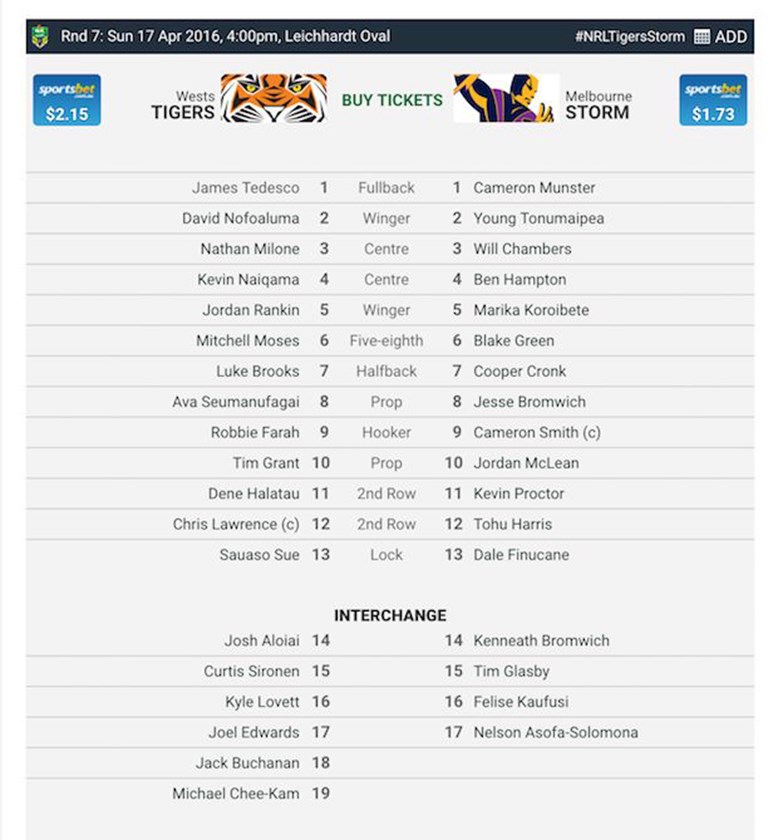 The last time Wests Tigers faced the Melbourne Storm, it wasn't too different a situation to the one they find themselves in this week. At Leichhardt Oval, the home side came into it on the back of a five-game losing streak and celebrating Aaron Woods' 100th game. This week, it's off a four-game losing streak and celebrating Tim Grant's 150th game.

The visiting Melbourne Storm got off to a flyer back in 2015 to lead 10-0 early in the match after two tries to former Wests Tigers winger Marika Koroibete. However, the Fijian international would soon find himself targeted in defence, with Wests Tigers running in three tries down their right edge to take an 18-10 lead into the sheds.

Melbourne hit back early in second half through Jesse Bromwich but that proved to be their final points for the match, with the home side running in a further three tries — James Tedesco running riot as he scored two tries and set up two more on the night.

➡︎    Wests Tigers have won 8 of 11 against Melbourne Storm at Leichhardt Oval.

➡︎    James Tedesco has scored 8 tries from 6 games, made 8 line breaks and 43 tackle breaks so far in season 2016 — the highest of any player in the competition.

Going the distance for cancer patients