The National Rugby League have confirmed the full draw for the 2016 NRL Season, with the release of the times and details for Wests Tigers final six rounds of the year.

Wests Tigers will have three home games in the final six rounds, including a family-friendly Saturday afternoon match against the  Titans at Campbelltown Sports Stadium, as well as two Sunday afternoon games at Leichhardt Oval on August 7 and September 4.

In Round 22, the Club will take on defending premiers North Queensland Cowboys on Sunday at Leichhardt Oval — a fixture they have not lost since 2000 — before facing Gold Coast next Saturday at Campbelltown Sports Stadium for the first time since 2011.

The Club's final home game of the year will take place on Sunday, September 4 when they take on the Canberra Raiders at Leichhardt Oval, with kickoff from 2:00pm.

See the confirmed details for the remaining rounds of the 2016 Season for Wests Tigers!

Note: All times listed in AEST 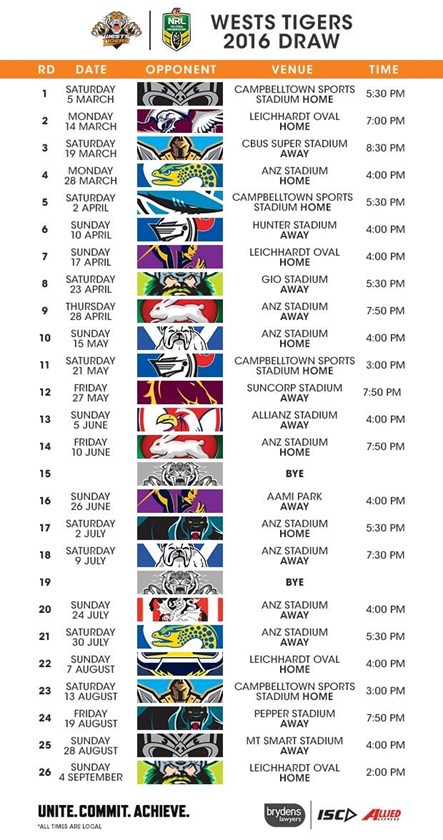 Presented By Elmo Software 16 hours ago

Presented By Elmo Software 16 hours ago

Presented By Awabakal 16 hours ago