Wests Tigers will head to Mount Smart Stadium this Sunday to take on the New Zealand Warriors knowing that they need to win to keep their finals hopes alive.

While Jason Taylor’s men will know the fate of their potential finals berth prior to the match — if Penrith lose to the Gold Coast Titans they cannot make the finals — Sunday’s game will no doubt see a sense of urgency from Wests Tigers as they look to bounce back from a comprehensive last-start 40-10 defeat to the Penrith Panthers at Pepper Stadium.

Level on points with the Warriors prior to Sunday’s game, a loss for either side would spell the end of their finals hopes heading into the final round of the regular season.

With James Tedesco (jaw) still sidelined, David Nofoaluma makes the move to fullback for the first time in his career — switching with Jordan Rankin, who moves back to the wing. Meanwhile, the Warriors will also see some changes in the backs, with Tuimoala Lolohea and Solomone Kata both named to make their return to the first-grade side.

When they met earlier in the year, it was Wests Tigers who came away with a 34-26 win over the Warriors, but much has changed for both sides since that Round 1 encounter.

With both teams coming into the match on the back of two-game losing streaks and desperate to keep their finals hopes alive, it’s shaping as a fascinating encounter indeed! 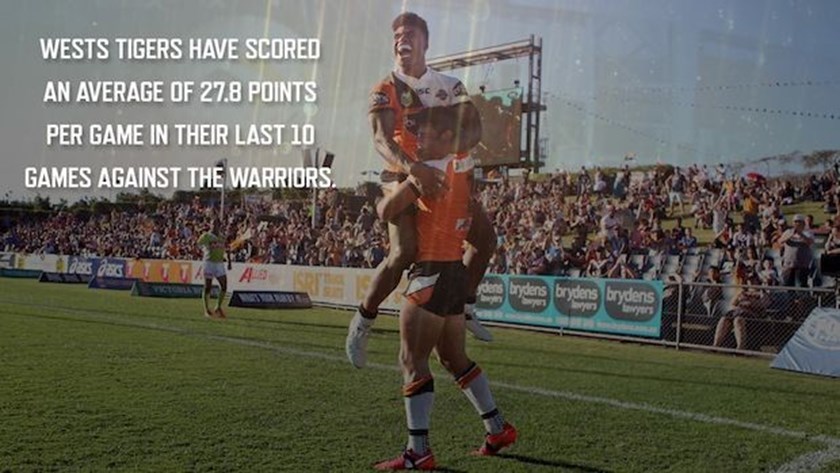 Wests Tigers led from start to finish last time they faced the Warriors, with Curtis Sironen, Kyle Lovett, David Nofoaluma, James Tedesco and Tim Simona all scoring in the opening 40 minutes to give the home side a 28-4 half-time lead. The Warriors would do their best to fight back in the second half, before a second try to Tedesco in the final minutes sealed the win for Wests Tigers over the then-premiership heavyweights (click here for more).

He might have plied his trade on the wing for most of the season, but a recent switch to fullback for David Fusitu’a means the livewire back will be around the footy much more this weekend, which could lead to success for the Warriors. One of the best sideline finishers in the game, Fusitu’a is the Warriors second top-try scorer of the year with 11 in 16 games, with 14 linebreaks and an average of 135 metres per game, and will no doubt be in the thick of whatever the home side’s attack produces on Sunday.

—    Wests Tigers average 27.8 points for in their last 10 games against the Warriors

Presented By Elmo Software 3 days ago

Presented By Elmo Software 1 week ago