Wests Tigers officially welcomed another two players into the family last Saturday as Tuimaola Lolohea (#203) and Esan Marsters (#204) made their Club debuts.

More than 200 players have now donned the colours of Wests Tigers since the Club’s foundation back in 2000, with plenty of incredible men coming from that extensive list.

Both Tuimoala and Esan held their own on debut against the Dragons on Saturday as Wests Tigers battled away gamely before going down 16-12 in the end. And it got us thinking as to what the most impressive games on debut for Wests Tigers have been.

From Benji Marshall’s dazzling footwork against the Newcastle Knights to Moses Suli earlier this year, see which debut comes in at number one, thanks to Share Care. Wests Tigers knew they were on to something special back in 2006 when a giant, talented player by the name of Taniela Tuiaki found his way on to the interchange bench. It might not have gone the way of Wests Tigers on the night with the Warriors running out 34-12 winners at Ericsson Stadium in Auckland, but it was certainly a game to remember for Tuiaki, who became the first player to score two tries on debut for Wests Tigers.

What was to come for Tuiaki would be an incredible, yet far too short, career, with the winger named in Wests Tigers Team of 15 Years back in 2014.

The second-youngest player to debut in the Club’s history, Moses Suli earned his Round 1 call-up after an impressive pre-season — his first with the full-time NRL squad.

And despite a nervy start (dropping the ball with his first touch), the giant 18-year-old quickly showed why Wests Tigers were so keen to re-sign him — setting up a try for Ava Seumanufagai in the first half and Luke Brooks in the second, before also crossing for a four-pointer himself as Wests Tigers ran out comfortable winners over the Rabbitohs.

Coming on in what would be the unfamiliar position of fullback, a fleet-footed Benji Marshall had all Wests Tigers tongues wagging when he took to the field against Newcastle back in 2003. Replacing Robert Miles after just 14 minutes, Marshall showed glimpses of the incredible potential and career that was to come in Wests Tigers colours, adding great spark and creativity en route to a 52-12 win for Wests Tigers. 200 games, 76 tries and 402 goals later, it’s safe to say the rest of the career was even better. 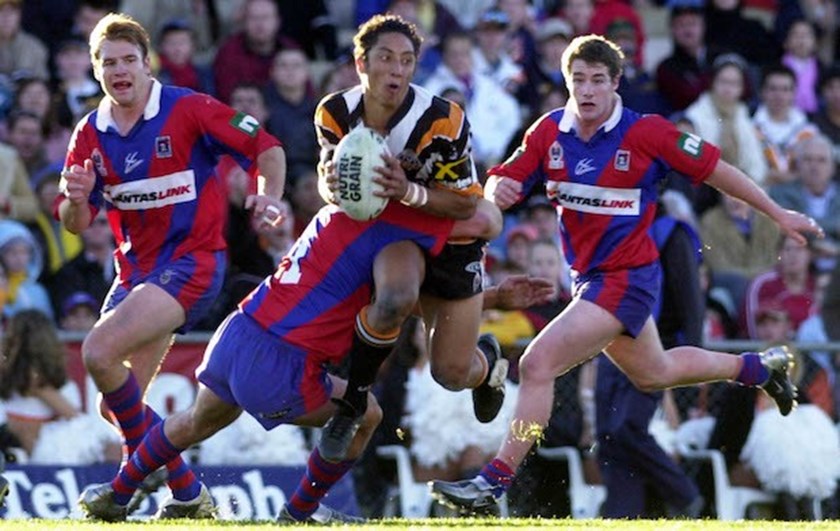 Another teenager to don the Wests Tigers colours, Brooks made his highly anticipated debut in the back end of 2013 at the iconic Sydney Cricket Ground. And despite the hype, Brooks certainly delivered on expectations with a hand in three tries as well as a solo effort himself to ensure a 34-18 win for Wests Tigers over the St. George-Illawarra Dragons. When they’re comparing you to Andrew Johns after just one game, it must have been one hell of a game!

There might not have been the comparisons with Andrew Johns, but there is no denying Chris Lawrence top spot on this list after his memorable debut against the Brisbane Broncos at Suncorp Stadium back in 2006. Playing against a side that would eventually go on to win the competition, the 17-year-old Lawrence showed no fear or nerves in his first game — using his blistering speed to burn Shaun Berrigan down the sideline for his first NRL try before setting up Ben Jeffery later in the match to ensure a thrilling upset victory.

Lawrence’s debut, at just 17 years of age, remains the youngest in Club history.