It might not have gone the way of Wests Tigers against the Gold Coast Titans on Friday night, but it was pleasing to again see big men scoring tries — this time Sauaso Sue crashing over next to the posts for his third try of the 2017 season.

Remarkably, of the 36 tries scored by Wests Tigers this season, close to 40% have been scored by big men, with Elijah Taylor (4) leading Sue (3) and Ava Seumanufagai (2).

And that got us thinking about the greatest Wests Tigers try-scoring forwards of all time, which we count down in this week’s Top Five, proudly brought to you by ShareCare.

It’s worth noting here that there are a number of honourable mentions who could have made this list, including the likes of Darren Senter and Robbie Farah who crashed over on numerous occasions from dummy half, or someone like Taniela Tuikaki who debuted in the forwards before moving to the wing. Particular mention must go to Chris Lawrence, however, with the back-rower currently sitting just one try away from Benji Marshall’s all-time try-scoring record at Wests Tigers. But given the majority of his career was spent in the centres, we’ve decided to leave him off this list he would otherwise come in on top of — focusing instead on the men who spent the majority of their Wests Tigers careers slugging away in the middle of the field.

So on to the top five!

First coming off the bench for Wests Tigers in 2001, Laffranchi would begin his try-scoring career at Wests Tigers in fine fashion — scoring tries in three of his first four starting appearances at the Club. Perhaps his most memorable try would come in the 2005 Grand Final, though, with the prop crashing through the Cowboys’ defence midway through the second half to take Wests Tigers out to a crucial 12-point lead. The big man would play one further season in Wests Tigers colours before moving to the Gold Coast Titans, where he continued his remarkable try-scoring record — grabbing 32 tries in 102 games.

He eventually retired from the game in 2014 having scored an impressive 69 tries from his 275 games with Wests Tigers, Gold Coast and St. Helens. Used as a utility throughout his illustrious career, Dene Halatau spent the majority of his time at Wests Tigers in the forward pack at lock or second row, with a number of iconic tries to his name. Transitioning from the centres to the middle in 2005, Halatau would famously grab a double in the Club’s stunning 20-12 upset win over the St. George-Illawarra Dragons in the Preliminary Final — finishing with 21 tries from his 180 games at Wests Tigers.

Retiring at the end of the 2016 season and inducted as a Life Member of the Club, Halatau would end his career with 25 tries from his 249 first-grade games.

There for the first Wests Tigers season back in 2000, Galea might not have been one to grab the headlines in his time at the Club, but the hard-working forward did grab his fair share of tries — racking up 32 four-pointers in his 151 games with the Club. He scored in the Club’s biggest ever comeback win over Newcastle back in 2001, and grabbed his final try for the Club against the Cowboys in 2007 before heading to English Super League and Hull KR.

The versatile forward would play another 141 games overseas before retiring due to injury in 2014 with 71 tries to his name from 293 games. 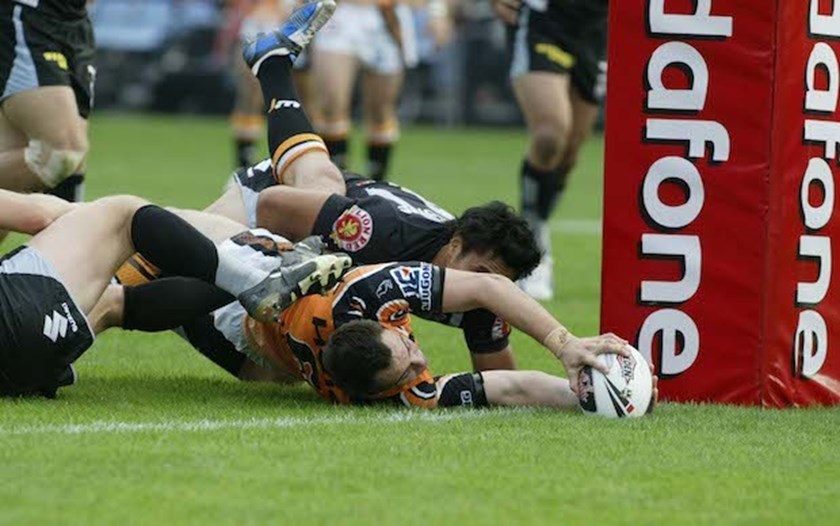 One of the more colouful characters in Wests Tigers history, the always-smiling and joking Liam Fulton also proved himself to be a pretty handy try-scorer in his time — crossing for 37 tries in his Wests Tigers career to sit 13th on the Club’s all-time try-scorers list. A try-scorer in the memorable 50-6 win over the Cowboys in the Elimination Final (and almost a try-scorer in the Grand Final as well), Fulton’s most spectacular try came in 2007 against the Newcastle Knights with this crazy juggling effort. After repeated head knocks in 2014, Fulton decided to hang up the boots on his 179-game career, which included 41 tries for Wests Tigers and Huddersfield.

But the man on top of this list is none other than a member of the illustrious 300-game club, Chris Heighington, who grabbed an impressive 39 tries in his 202 games with Wests Tigers. A try-scorer in the Preliminary Final win over the Dragons in 2005, Heighington also scored in the 2010 finals win over Canberra and 2011 finals win over the Dragons, before crossing the line in his penultimate Wests Tigers game in 2012. The tries might have dried up for “Rhino” since then — crossing just once in the past four years for the Cronulla Sharks — but there’s no denying his place on top of this list and inside the Club’s Top 10 all-time try scorers, currently tied with Brett Hodgson, Tim Moltzen and current Wests Tigers flyer David Nofoaluma.

Presented By EISS Super 4 days ago