It’s certainly been a big few weeks for Dane Gagai who, after confirming he will move to the South Sydney Rabbitohs at the end of the year, produced arguably his finest game of the season in State of Origin Game II — scoring two tries to keep the 2017 series alive.

Re-joining the Knights last weekend, Gagai was moved from his usual Club position of fullback to the centres against the Dragons. And with his replacement at fullback Nathan Ross bagging his first career hat-trick in the heartbreaking defeat, it appears unlikely that the 26-year-old will be moving from the centres anytime in the near future for the Novacastrians.

Gagai is far from unfamiliar at centre; the Souths Sharks junior has played 95 games there at Club level before moving to fullback over the last 18 months, and has also featured there at a representative level. However, what the numbers do indicate is that Gagai sees far less ball in the centres and can be targeted in defence — as seen in last week's loss to the Dragons.

His opponent in Round 17, youngster Moses Suli, might not be producing what he did on debut each week, but there’s no denying the talent and ability of the giant teenager.

Having played every game so far in his rookie season, Suli is averaging well above 120 metres per game, with 39 percent of his total metres coming after first contact — an incredible percentage given his inexperience and supposed side disadvantage as a back.

With Luke Brooks returning from injury, Chris Lawrence out with injury and Kevin Naiqama moving to fullback to cover James Tedesco over the past month, Suli’s left-edge combinations have seen a great deal of change — creating some vulnerabilities in defence that the Cronulla Sharks and Gold Coast Titans both found success in over the past two weeks.

Whether Gagai and the Knights will be able to do the same this week remains to be seen. 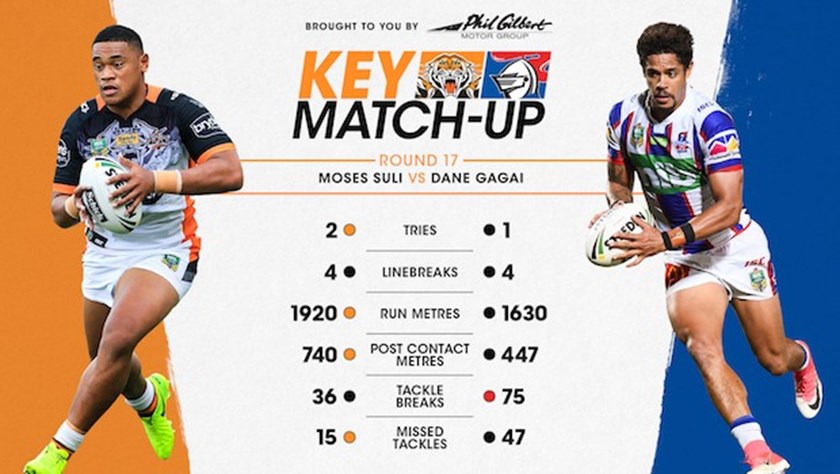 While the attacking potency of both players is clear, it’s likely that the difference between the two on Sunday will come down to their abilities on the defensive side od things.

Gagai has missed a whopping 47 tackles so far this season — the most of any outside back in the competition this year and 32 more than Moses Suli — and was definitely targeted in this regard last week by the Dragons. Gagai missed eight tackles in total, with four of the Dragons five tries last weekend scored down his edge — including three direct missed tackles.

In contrast, Suli also had a tough time against the Titans (and against the Sharks before that) — missing five tackles over the past two weeks — and both players certainly be looking to improve defensively this week to help end their team’s disappointing run of form.

Gagai and Suli have obviously never played each other before at Club level given 2017 is Suli’s rookie season, but it’s worth noting here Gagai’s impressive record against Wests Tigers — winning five of his seven games against them while scoring three tries.

Only against Parramatta (winning five of six with three tries) does Gagai have a better record.