And while Nofoaluma might have a little while to go to catch Chris Lawrence and Benji Marshall atop the list with 76 tries respectively, the Campbelltown junior is certainly making a case to be one of the strongest wingers the Club has ever produced.

So in this week’s Top Five at Five, we look at just where Nofoaluma’s try-scoring feats rank compared to former Wests Tigers wingers — brought to you as always by Share Care. Joining Wests Tigers for the start of the 2010 season, Tuqiri wasted no time crossing the try-line — grabbing a four-pointer with his first touch of the footy against the Sea Eagles in Round 1, before continuing that form to score six tries in his opening six games. The streak did slow down for the former Dally M Winger of the Year, but the numbers continued to roll in, with Tuqiri ending his four-year spell at Wests Tigers with 27 tries. 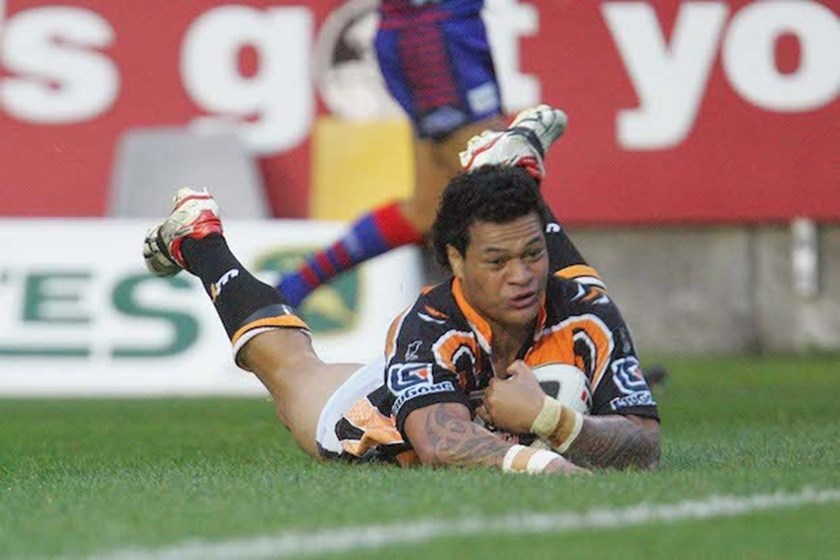 One of the most damaging players ever to have graced the field, Taniela Tuiaki burst on to the scene with a double on debut against the New Zealand Warriors, before finding his feet on the wing midway through the 2006 season. Tuiaki’s final numbers at Wests Tigers finished with 42 tries from 78 games, with four of those tries removed from this list as he came off the bench and played in the second row. With a career best 21 tries from 22 games in the 2009 season, Tuiaki’s season and eventually career was cut short with a devastating ankle injury — leaving him with a total of 38 tries from his 71 games on the wing. His record of 21 tries in a season still stands as a record at the Club today.

Debuting for Wests Tigers in 2007, Ryan moved around the backline when at the Club, but the majority of his time was spent out on the right wing — playing five seasons on the flank before moving to fullback in 2012. From the 2008 season through to 2012, Ryan scored at least seven tries every season, with his combination with Benji Marshall helping Wests Tigers out of many tight situations throughout the years. His try-scoring rate might fly under the radar a little with 40 tries in 74 games on the wing for the Club. With two tries on the weekend, David Nofoaluma moved in to second all-time for tries scored on the wing for Wests Tigers — a remarkable feat given the Campbelltown junior is still only 23 years of age. Notably, Nofoaluma has a Dally M Try of the Year to his name in 2013, scored an impressive 14 tries in 23 matches last season, and is on track to finish the year as the team’s leading try-scorer for the first time in his career. Locked in at the Club until the end of 2021, Nofoaluma seems odds on to not only catch the man on top of this list, he might not be too far off Marshall and Lawrence as the all-time leader. Grand Final winner Pat Richards comes in top of this list with an impressive 51 tries in 81 games on the wing for Wests Tigers. Joining the Club in 2004 from Parramatta, Richards’ 2005 season was superb on the right wing — crossing for 20 tries in 28 games including the iconic Grand Final try off Marshall’s flick pass. Returning in 2014, Richards also added 26 tries in just 43 games in 2014 and 2015, before moving back to the Super League with Catalans and ending his rugby league career. Definitely one of the greats!

Be there as Sunday afternoon footy returns to Leichhardt Oval against the Sea Eagles!