Mahe Fonua arrived as a fan favourite from his time in Super League, and it didn't take long for the 25-year-old's popularity to skyrocket in the NRL.

Full of confidence after helping Tonga to a stunning Semi Final finish at the 2017 Rugby League World Cup, Fonua missed selection for the opening few weeks of the season but made it impossible for Coach Ivan Cleary not to pick him after an incredible run of performances in the Intrust Super Premiership.

When he did crack the first-grade side, Fonua produced a brilliant try assist and then try in his first two games before a breakout performance against the North Queensland Cowboys in Round 10 — chalking up a linebreak, five tackle breaks, 230 metres and a number of remarkable try-saving tackles.

His season was somewhat interrupted by a broken arm that saw him miss almost two months, but the cult hero still managed to rack up 10 appearances at his new club to leave plenty hopeful of what's to come next year — averaging more than 150 metres and three tackle breaks per game throughout the year.

The arrival of Paul Momirovski from the Sydney Roosters and the return of Corey Thompson from injury will add some increased competition for spots next year, but with a full pre-season under his belt this time around, look for Fonua to really hit the ground running in 2019 as he seeks that crucial Round 1 spot.

Having spent time at both centre and wing throughout the year, Fonua's involvement was still high regardless of where he played and the 25-year-old is certainly not an easy man to mark up against. With the ball in hand, his ability to break a tackle or simply not go to ground and create an offload is as good as anyone in the team and his presence adds so much to the side's attack. But perhaps what stood out most was his defence, in particular some of his one-on-one tackles. Fonua isn't necessarily known as a superb defensive centre, and while there were a few hairy moments during the year, some of his reads in shutting down overlaps and holding players up close to the line didn't go unnoticed by the Members and fans.

And one other thing that stood out... yeah, the haircut (or lack of it!)

It can't be overstated how much having a full pre-season is going to help Fonua this time around, given the talented Tongan didn't arrive at the club until after the Christmas break last year. "Fitness isn't my forte," Fonua laughed during pre-season last year and having seen him in both the gym and the field, it's clear that his biggest asset is his power game and strength. How Wests Tigers go about utilising that in 2019 will be fascinating, as will his potential selection in Round 1. There's a chance that Fonua could be in the running for a spot on either the wing or centres, and hopefully that competition brings out the best in him — as it did at the start of 2018 when he was pushing his way in to contention while playing reserve-grade.

Selected in Tongan squad for Test match against Australia 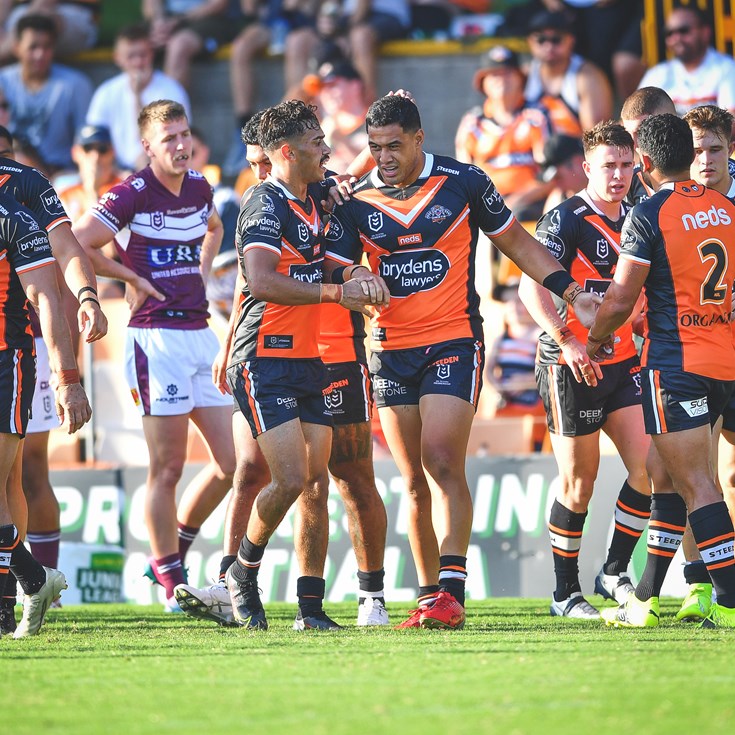 Fonua: "Don't doubt we can still do damage"