Ask Wests Tigers centre Robert Jennings about going head to head with brother Michael in Monday’s match against Parramatta at the new Bankwest Stadium and he immediately tells you that they’ve won one game apiece in their previous NRL clashes.

“We definitely keep a count so I want to get one up on him and hold that lead on him,” Jennings said.

While both teams are determined to win the two competition points, Jennings has more at stake than most of his team-mates as he and Michael will meet up after the match for their weekly family get together.

The siblings, who have played against each once in each of the past two seasons, won’t speak to each other before the match but are planning to have dinner together on Monday night.

“We are really close, we see each other each week down at mum’s. We all meet up together and have a big feast,” Robert said.

“Leading up to a game we keep away from each other but after the game we will get together for a big feed so hopefully we can win and I get the bragging rights. We will be on opposite sides of the field but I will be looking to get over to his side and find him.”

Jennings, who scored 19 tries on the left wing for South Sydney last season, drew on Michael’s experience when his future was in limbo during the off-season after the Rabbitohs were unable to finalise a new contract with him due to salary cap issues.

Michael was released by Penrith just weeks before the start of the 2013 season and joined the Sydney Roosters team which won the premiership that year.

Robert is hoping to have similar success with the Tigers after re-uniting with his former Souths mentor Michael Maguire at Concord in late February.

“Family is such a big thing to me and it is important that we stay close to each other,” he said. “You are going to be hit with some tough decisions like that during your career but I have moved on and I am happy at this club.

“It was a bit of a big stuff around at the time. I thought I had a contract lined up but unfortunately it didn’t work out because they were having cap problems. It put me in a tough situation but I didn’t worry about it too much.

“I didn’t want to get too stressed because my missus was pregnant at the time too. I guess you could say footy is a tough business, with the decisions that clubs have to make, but I am glad with how it has worked out.”

Jennings' partner has since given birth to a baby daughter, with Jennings sharing his joy on his Instagram account.

She’s already giving attitude with that look 🤦🏾‍♂️😂❤️ man lost for words @sammywitham I love you so much! Thank you for blessing me with this beautiful gem ❤️ big teti tingz from now on 😂

While there was interest from other clubs, Jennings was keen to play under Maguire again and the 23-year-old became the fourth ex-Rabbitoh to join the Tigers ranks, along with Robbie Farah, Chris McQueen and Robbie Rochow.

Jennings said Maguire had instilled the same values and standards at the Tigers as he did at Souths, whom he guided to the 2014 premiership.

“We have built a strong culture and everyone is buying into it,” he said. “We are looking at winning a premiership, that is big picture and we are chasing towards that. You can see how Madge is taking this club forward and it’s growing.” 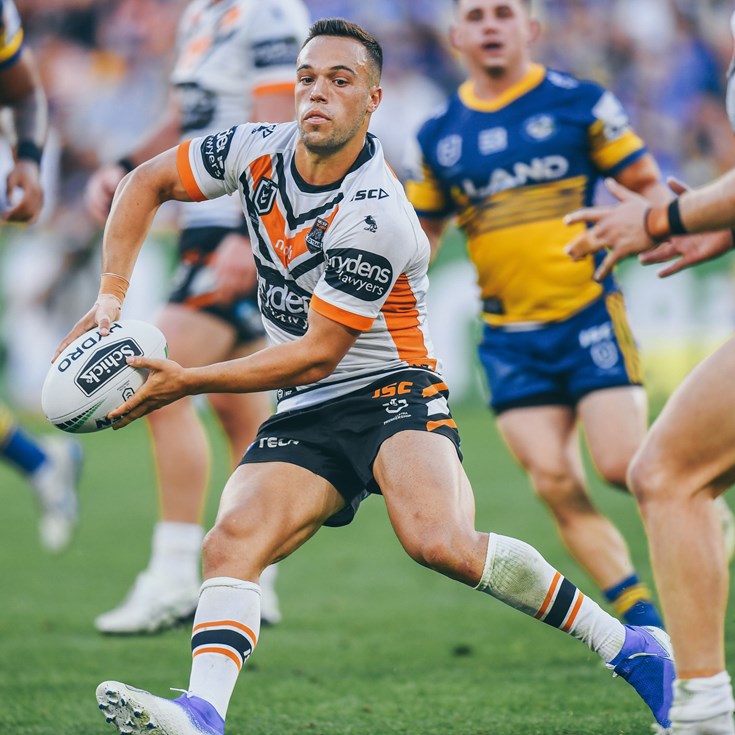 Eels pile on points to down Wests Tigers in Bankwest opener

Farah overcomes bad back to help Wests Tigers' bounce back

Nofoaluma looks for the best seat inside Bankwest Stadium