Wests Tigers have hit back from an early 14-0 deficit to run over the top of the Titans 30-14 at Tamworth's Scully Park, though they face a nervous wait on a knee injury to five-eighth Josh Reynolds.

Reynolds left the field early with a suspected MCL sprain forcing Ryan Matterson to deputise in the halves alongside Luke Brooks while the Titans were also forced into an early change with Dale Copley coming off with a quad strain.

The Tigers were a rabble early on and the energetic Titans capitalised but Michael Maguire's men found their mojo midway through the first half when Gold Coast opted for a penalty goal rather than going for the kill.

A run of ill-discipline midway through the openings half combined with some shoddy edge defence then saw the Titans surrender their hefty advantage to go to the sheds down 16-14.

The match started in the worst possible fashion for the Tigers with Reynolds dropping the kick-off, although they weren't made to pay immediately with Dale Copley putting a foot on the touchline as he attempted to score.

First points instead came via prolific Titan Anthony Don in the 12th minute, latching onto a Tyrone Roberts cross-field bomb.

The Titans marched upfield in the set after points and cracked the Tigers again, with a lovely Bryce Cartwright short ball sending Tyrone Peachey through a yawning gap on Reynolds' restructured edge.

Fonua fires with hat-trick in Tamworth

With Esan Marsters caught in front of the kicker from the restart the Titans were suddenly again on the attack but when they received another penalty chose to stretch the lead to 14-0 rather than pile the pressure on and it proved to be just the let-off the Tigers needed.

The Titans conceded several penalties shortly after to piggy-back the Tigers into attacking range and the Gold Coast left edge was cracked by Mahe Fonua after a quick shift out wide.

When Michael Gordon spilled a Moses Mbye attacking grubber for Robert Jennings to score in the 31st minute the gap was closed to two points and when Marsters beat three on a run to the line in the 36th minute the Tigers took an unlikely two-point advantage to the break.

Jennings caught the markers napping off a quick play-the-ball at the Titans line in the 52nd minute to make it four straight Tigers tries, then five when Fonua earned his double just inside the hour mark.

Don leaps above the pack

The Titans managed to get back in the grind and mounted a series of attacking sets but the Tigers were good enough to turn them away time and time again.

Instead it was the Tigers who struck one final blow with Fonua streaking onto a Brooks grubber seconds from time to complete his hat-trick and seal a much-needed 30-14 win. 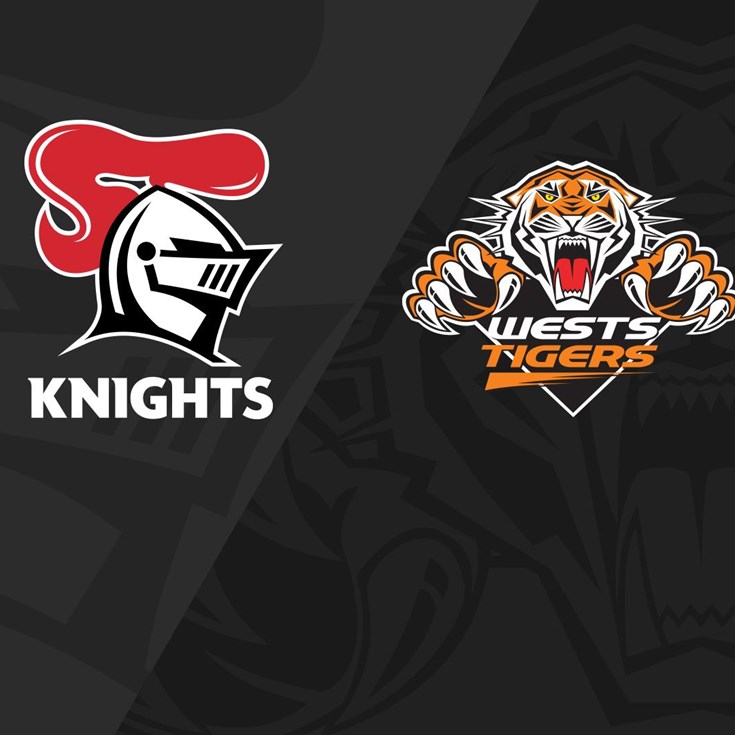 Luciano Leilua toes it through to score