South Sydney’s best start to a season since 1989 has come at a hefty price with star halfback and NSW Origin hopeful Adam Reynolds the latest busted Bunny in a 32-16 win over Wests Tigers.

The Rabbitohs 10-1 record leaves them sitting atop the NRL ladder with a winning run that matches their march to the minor premiership 30 years ago.

But they now stare down a daunting rep period where they will be without up to four Origin stars and potentially Reynolds, who hobbled from the field with what was feared to be a possible fractured fibula as the Tigers were put to bed.

The 28-year-old will be sent for scans on Sunday.

Already unable to name a full 21-man Rabbitohs squad for this match due to a bulging casualty ward featuring Alex Johnston, Braidon Burns, Kyle Turner, Adam Doueihi, and the retired Greg Inglis, Reynolds untimely sidelining came with he and Cody Walker making one last bid for a NSW Origin call-up.

Blues coach Brad Fittler will instead be scouring the phone book for fit play makers at this rate, but it started superbly for Reynolds and his fellow sky blue hopefuls.

After 10 minutes of chess movements and a Reynolds penalty goal, Cameron Murray did his chances of an Origin debut no harm, Damien Cook piloting the 21-year-old over from short range for a telling opening salvo.

Reynolds himself went even better two minutes later - the diminutive No. 7 dummying past Ben Matulino and scurrying 20 metres for a 14-0 Rabbitohs lead.

They had to wait 22 minutes for their crack at Souths line, but Thompson made the most of it by scything onto a no-look inside ball from Benji Marshall to bust the Bunnies open.

All eyes were then on Reynolds as the pint-sized play maker was caught awkwardly in a tackle on Thompson, the Souths star at first attempting to play on before finishing the night on crutches.

Tries either side of halftime to Cook – who started a Rabbitohs raid with a surge from dummy half before swooping on a loose pass to finish it too – and Liam Knight put the Rabbitohs out to a comfortable 26-12 margin.

Belying the 34 years in his legs, Marshall put them into temporary orbit with a hop and skip that put him on the outside of makeshift Rabbitohs centre Ethan Lowe, Marshall eventually crossing for his first try of the season.

With Souths in cruise control the Tigers threatened throughout the second half, only for untimely mistakes and penalties to kill their momentum.

A second try to Murray in the 67th minute sealed it for the Rabbitohs, despite the on-field officials referring his touchdown of a Cook grubber as no-try with several Souths chasers appearing to be offside as the ball bounced off the posts.

Regardless, Murray’s two tries, 43 tackles and 143 running metres should be enough to secure him a spot on the NSW bench, while Cook is in ominous touch after setting up two tries and scoring another himself.

Walker’s chances of a Blues halves debut have likely dived with Reynolds’ injury all but ruling out a Rabbitohs club combo at the NSW scrumbase, though he could still be in mind for a bench utility role. 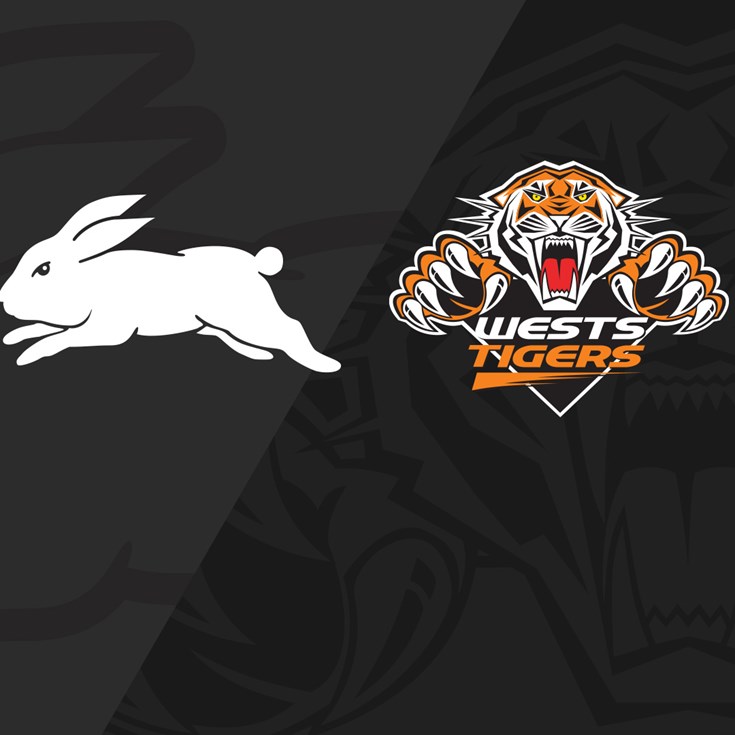