Wests Tigers will be looking to secure a crucial two points as they take on the Canberra Raiders this Friday night in what will be the club's first home game at the new Bankwest Stadium.

Fresh after the Round 12 bye, Michael Maguire's side will face a tough test against a Canberra side in form and playing good football in season 2019, but question marks still surround how the two sides will back up with their Origin commitments.

Wests Tigers captain Moses Mbye and forward Ryan Matterson look set to back up for the side after playing a total of eight minutes together on Wednesday night — Matterson was unused as 18th Man while Mbye came off the bench — but there are more questions for Canberra with three players all featuring during the game.

Jack Wighton came off the bench for the Blues and looks likely to back up, while Josh Papalii should be right to play despite big minutes for Queensland.

The major concern to come from the match is that of Nick Cotric, who finished the game but was hampered by a knee injury throughout. He will undergo scans on Thursday but is expected to play as Canberra seek to make it four wins in a row over Wests Tigers in Sydney — a streak dating back to Round 16, 2014.

Aside from the pending inclusion of the various Origin players, the other big team news to note for Wests Tigers is the return of inspirational forward Chris Lawrence, who will play his first NRL game this year following a horrific pre-season injury.

Lawrence will come in to the side after being confirmed to return by Maguire, but his position is not yet clear with team lists to be updated closer to kickoff.

What is clear is the return of David Nofoaluma after a strong showing against the Rabbitohs prior to last week's bye. The Campbelltown junior will play on the wing and Mahe Fonua in the centres after Maguire updated his side on Thursday.

For the Raiders, Jordan Rapana returns from a knee injury on the wing, while Emre Guler comes on the bench with Hudson Young and Corey Horesburgh both out.

Fresh off a man-of-the-match effort against the Bulldogs in Round 12, Raiders fullback Charne Nicoll-Klokstad certainly looms as a danger player to watch for Wests Tigers, with the 23-year-old sitting fifth in the league for total runs (223), first in kick return meters (763 metres) and second in run meters (2097 metres).

Remarkably, in his 19 games against the Raiders, Marshall has won 18 times.

Wests Tigers head into this week's clash as last-start winners against the Raiders after winning a tight 22-20 tussle when they met in Round 22 last year.

Wests Tigers — Moses Mbye and Ryan Matterson will be right to go after getting through their State of Origin commitments on Wendesday while David Nofoaluma and Mahe Fonua return in place of Robert Jennings and Paul Momirovski.

Canberra Raiders — Nick Cotric is having scans to determine the full extent of his knee injury experienced during Origin. Michael Oldfield remains in the squad as cover, while Jordan Rapana will return from injury on the wing. Josh Papalii and Jack Wighton have been cleared to return after playing in Origin on Wednesday.

Odds correct on Thursday, June 6 — 18+ only and gamble responsibly

All set for our first home game!@BankwestStadium looking 🔥🔥🔥 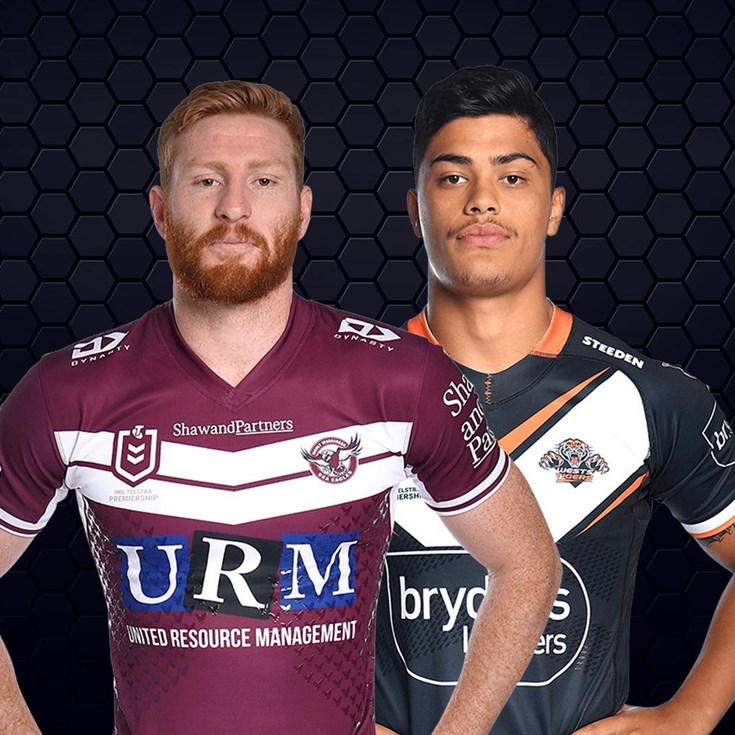