Three tries from star half Shaun Johnson and a brilliant showing from young hooker Brandon Smith led the New Zealand Kiwis to a 34-14 victory over Mate Ma'a Tonga in the opening game of the Oceania Cup on Saturday.

Smith was in a class of his own for much of the match at Mount Smart Stadium, at times making Tonga's defence appear second rate with his piercing runs, as he clocked up 10 tackle busts and 126 running metres in less than an hour on the field.

The energetic Melbourne Storm rake was also directly involved in two of New Zealand's six tries, scoring the opening one with a 35-metre dart before setting up another early in the second half with another long-range run and kick.

There would have been daylight between Smith and the next best Kiwi had it not been for Johnson's performance, with the playmaker starring in his first game back in Auckland since his dramatic exit from the Warriors at the end of 2018.

It was also his 30th Test for his country.

Johnson crossed twice at the back end of the first half, and then opened the second-half scoring, and managed the game well alongside Benji Marshall in what was only the pair's second Test together.

After Smith's 11th minute try, which Esan Marsters converted, Tonga began to dominate the game and eventually hit back via Solomone Kata, after Daniel Tupou's clever bat-back of a John Asiata kick.

Up 6-4 with half-time approaching, the Kiwis got a timely injection from Johnson, with the Cronulla Sharks ace twice slicing through Tonga's left edge to extend the home side's lead.

Minutes into the second half Smith's destructive carry through the middle of the park, and well-weighted grubber into the goal-post pad, saw Johnson beat Roger Tuivasa-Sheck to the loose ball for his third try and New Zealand's fourth.

Tonga fought hard to try and get back into the match, but their lack of a genuine play-maker was clear to see and they struggled to build pressure.

With 20 minutes to go the air appeared to have been knocked out of Tonga, and the Kiwis made them pay with tries in quick succession to debutant Jahrome Hughes and centre Joseph Manu. 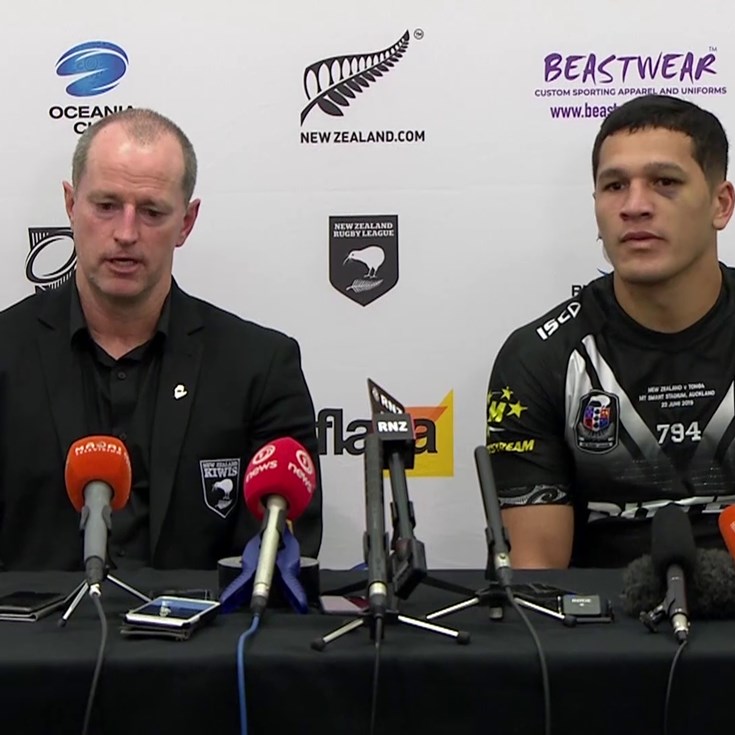 How well do the Kiwis know Benji Marshall