An individual piece of brilliance from Michael Chee-Kam has helped secure Wests Tigers a nail-biting 14-9 victory over South Sydney at Bankwest Stadium on Thursday night.

The Bunnies took a 9-8 lead through the boot of Adam Reynolds with six minutes remaining but Chee-Kam did it all himself for the second time this season to steal a win for the joint venture, splitting past the Bunnies' No.7 in the following set and racing 40 metres to the line.

The result was the Bunnies' fourth loss on the trot and compounded a disappointing night for the club with the immediate future of George Burgess under a cloud after the prop was placed on report for an alleged eye gouge on Robbie Farah early in the contest.

Burgess was cited for making contact with Farah's face before the Wests Tigers veteran made a complaint to referee Adam Gee, who placed the 27-year-old on report.

It's the second time in eight months Burgess has come under scrutiny for contact with the eyes of an opponent.

The Rabbitohs was prop suspended for four weeks last year playing for England against the Kiwis after being found guilty for a contrary conduct charge on Dallin Watene-Zelezniak.

"I thought it was more on the forehead," Rabbitohs coach Wayne Bennett said after the clash.

"I can certainly say that [it was ill-disciplined], there was certainly no need for him to put himself in that position for a start. I'm not condemning him for it in the sense that I'm not sure if his fingers made contact with the eye or not.

"But the point is it was just totally unwanted anyway. He's been good this year, he's just had a moment. I wish I could tell you why they have those moments.

"It should've been the last thing on his mind."

Wests Tigers opted for an early penalty goal through the Burgess incident but the Rabbitohs were quick to respond with two points of their own after Benji Marshall failed to deliver a line dropout on time to concede a penalty from in front.

The Tigers lost Moses Mbye for 15 minutes next with the Maroons utility falling heavily on the Bankwest Stadium turf to require a head injury assessment.

Mbye later returned but not in time to stop the Bunnies crossing for their first try with returning centre Braidon Burns running a strong line off John Sutton to help send Corey Allan over under the posts.

The Rabbitohs looked to have the upper hand late in the opening half but their error count began to rise with the slippery surface under foot.

Wests Tigers finally made use of their 23 possessions inside the Rabbitohs' 20-metre zone to send Corey Thompson over via the boot of Luke Brooks before halftime to level the game.

Both sides left a lot to be desired on the paddock in the second half, so much so that it took a couple of ground invaders side-stepping security to bring the crowd to its feet.

The Bunnies rallied late to break an 8-8 deadlock with Reynolds slotting a 74th minute field goal at a slippery Bankwest Stadium in front of 9,807 people but Chee-Kam had the final say two minutes later.

However, the big talking point was Burgess on report. He also picked up a hip injury before taking no further part after just 17 minutes of game time. 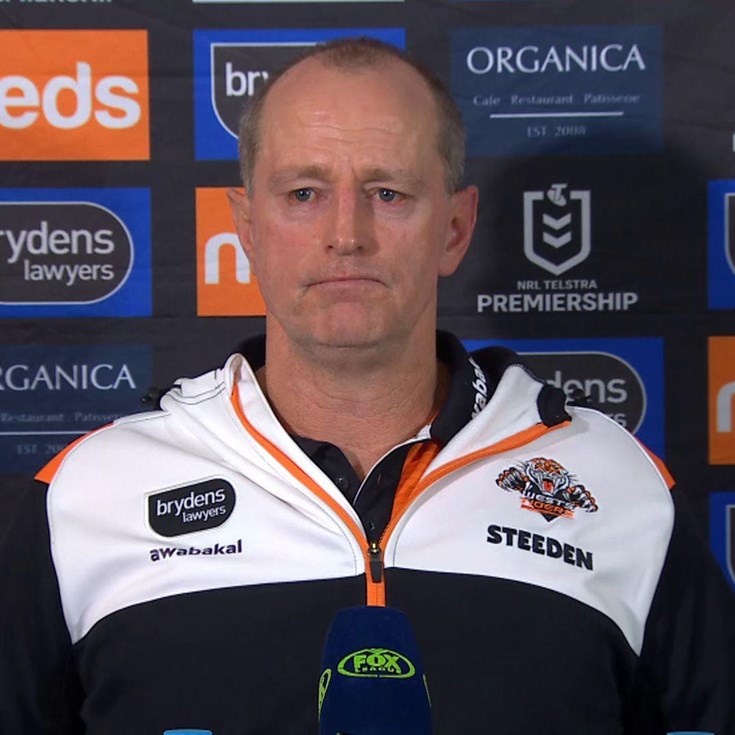