Leichhardt Oval is once again set for three blockbuster fixtures in 2020 following the release of the NRL Draw last month. 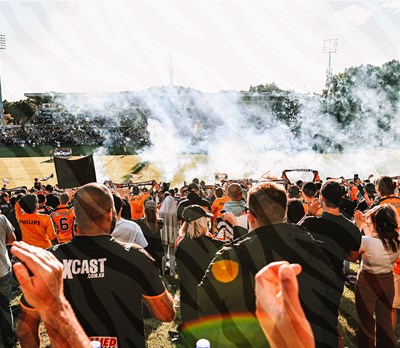 Package name:
Leichhardt Oval
Package price:
From 125 for per adult

The iconic suburban ground will play host to Wests Tigers' first and last home games of the regular season as well as a massive Sunday afternoon clash against a long-standing Sydney rival right before the start of the State of Origin period.

Wests Tigers have won five of their past eight games at Leichhardt Oval and boast a better winning percentage at the ground than any other venue in the game — making it the perfect place to start the defence of #OurJungle in 2020 when they welcome the Newcastle Knights on Sunday afternoon in Round 2.

Michael Maguire's men have won five of their past six games against the Knights and have averaged over 34 points per game in that stretch of games.

Newcastle have not beat Wests Tigers in their history, with the home side getting the job done back in 2011 with a Robbie Farah field goal in Golden Point.

Following that, Wests Tigers will then take on South Sydney in Round 10 in a game that is sure to attract a strong crowd between two long-standing rivals.

The Rabbitohs have not travelled to Leichhardt Oval since 2007, with Wests Tigers winning three of the last four games between the two at the ground.

Maguire's side memorably got the job done against South Sydney earlier this year thanks to a last-minute try from Michael Chee Kam at Bankwest Stadium, and they'll be hoping to get another positive result when they meet on Sunday, May 17.

Interestingly, Wests Tigers have scored more points against the cardinal and myrtle than any other side in the competition with 853 points from 34 games.

Wests Tigers will then close out the regular season at Leichhardt Oval in a game that could be as big a night off the field as it is on it. Potentially the final home game for Wests Tigers legend Benji Marshall, Maguire's side will also be hoping the Thursday night game is their final home game before a long finals run.

Their opposition is a side that knows Leichhardt Oval well — the Cowboys have been there nine times against Wests Tigers — but their record is far from ideal.

The home side have won eight straight games at the venue, with over 10,000 fans packing in for a Wests Tigers Thursday night victory last year — a very strong crowd for a weeknight that will likely be bettered in the 2020 regular season finale.

With new and improved Membership packages and options this year, make sure you secure your seats at Leichhardt Oval this year with a Wests Tigers Membership. Packages start from $109 for an Adult and $80 for kids — giving you access to all three Sunday afternoon games and a range of other benefits!