Wests Tigers have gone down in a heavy defeat to the Sydney Roosters tonight at Leichhardt Oval, with the visitors leading from start to finish to post a commanding 38-16 win.

New-look halves combination Kyle Flanagan and Drew Hutchison excelled early and put the Roosters in a commanding spot at the break — leading 20-0 — before a determined comeback from Wests Tigers threatened to cause a boilover.

Two quick tries in the second half and a 90m intercept had the home side full of momentum and in the hunt, but costly errors at key moments continued to hamper any chance at a comeback as the Roosters again kicked away to win.

The loss leaves Wests Tigers well outside the top eight with five games remaining in the regular season, and needing an upset win over the competition frontrunners Penrith Panthers to keep their hopes at a finals berth alive.

It was a good start for the hosts who controlled the early running but found themselves behind after an error from Luciano Leilua in a dangerous attacking position corresponded with Matt Ikuvalu crossing in the opposite corner.

Playing in his first game for several weeks, Kyle Flanagan made no mistake from touch to give the Roosters a 6-0 lead after 10 minutes and he would do the same from the following side shortly after when Brett Morris touched down to extend the lead to double digits.

Dominating possession and the running as a result with a perfect completion rate, Trent Robinson's men would make it 16-0 in as many minutes when Josh Morris capped off a damaging run from Sitili Tupounia to touch down out wide.

As Michael Maguire turned to his bench for Thomas Mikaele and Alex Twal to make an impact in their return from injury, even the captains challenges weren't going right for Wests Tigers. The visitors would have a knock-on call on their line surprisingly overturned by the Bunker, before surviving a challenge from the hosts for an offside penalty against Russell Packer despite a seemingly glaring strip by Joseph Manu.

Morris would make it a double in his return from injury when he collected a long pass from Flanagan soon after to make it 20-0 after 25 minutes, with only the left upright denying the halfback his third sideline conversion of the night.

Having managed to stop the bleeding in to half-time, Wests Tigers were the first to strike after the break when Jacob Liddle continued his good form since return when he darted over from close range — cutting the scoreline to 20-6.

Liddle goes himself from dummy half

Arguably his side's best throughout the opening exchange, Adam Doueihi would reduce the deficit further when he burst through off a cut-out pass from Benji Marshall, with Moses Mbye converting again to have his side just eight behind.

Marshall puts Doueihi in as the Wests Tigers surge

Tommy Talau went within a whisker of making it a one-score game when he collected an intercept pass from James Tedesco, but was run down just shy of the line by Drew Hutchison in a play that would prove critical in the second half as the halfback soon backed up on the inside to put the visitors back up by 14.

That try would take the wind out of the sails in the 3,003 strong-crowd at Leichhardt Oval and Wests Tigers as well, with Joey Manu and Josh Morris both crossing for tries inside the final 10 minutes to put the result beyond doubt.

In a last minute push, David Nofoaluma leaped over on the right edge to score the final try of the match as the buzzer sounded. 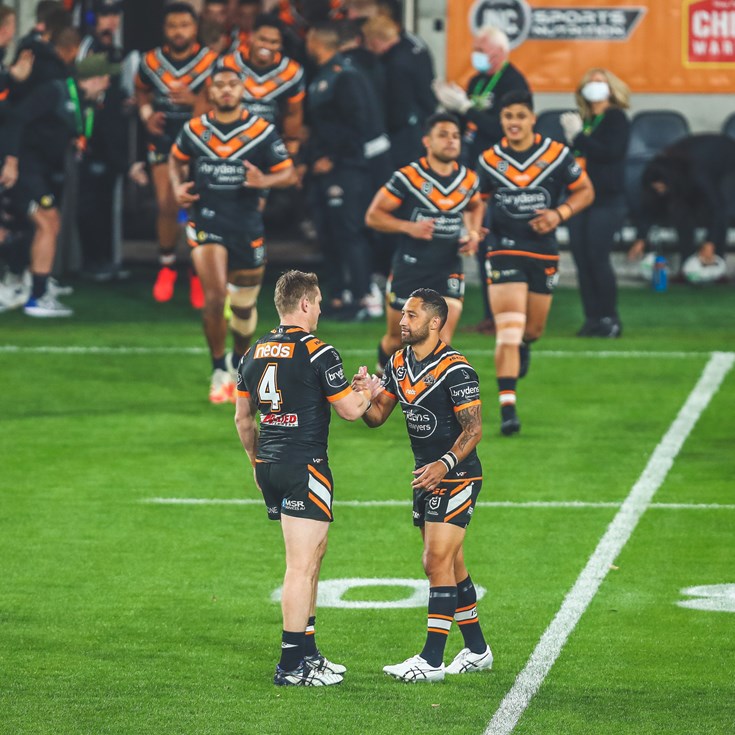 Presented By Labourpower 3 weeks ago
99:45