A half-time address by master coach Wayne Bennett inspired an inexperienced and undermanned Queensland team to an upset defeat of NSW after coming from behind to triumph 18-14 in the opening State of Origin at Adelaide Oval.

Bennett, who answered an SOS to undertake a fourth stint as Maroons coach, turned the clock back almost two decades by guiding a team of rookies to an unexpected win that ensures NSW must win both remaining games to retain the Origin shield.

The win drew comparisons with 2001 when Bennett returned to the Maroons coaching role and blooded 10 rookies in a series opening defeat of NSW.

On this occasion he handed eight players their Origin debutants and with the team trailing 10-0 he delivered a half-time speech that resulted in another famous Queensland victory.

"They will be better, they have just got to toughen up mentally to come back and do it again next week. The hard thing is coming off the high and coming back to play against a team that got beaten tonight."

While Bennett was vague on what he had said at half-time, players revealed that he had challenged playmakers Daley Cherry-Evans and Cameron Munster to take control of the match and their kicking game set Queensland on the course for victory.

He also wanted to play more through the middle rather than trying to spread the ball quickly to the edges and the tactic paid off with centres Dane Gagai and Kurt Capewell given one-on-one opportunities against their opponents.

"Wayne just challenged a few of us to get our hands on the ball and attack them," Cherry-Evans said. "We moved the ball too much in that first half.

Fullback AJ Brimson said: "He gave us a well deserved rev up. He was happy with our middles and defence, but just with the footy we were trying to pass and pass without earning the right. In the second half we went through them and that opened up the opportunities."

The Maroons scored 18 unanswered points to dominate a second half in which NSW rarely played the ball inside Queensland's 20-metre zone.

Capewell, Gagai, hooker Jake Friend and utility Ben Hunt were the stars of the Queensland win but Bennett had praise for all of his players.

"I wasn't worried about their self-belief, I just thought that they put a Maroon jersey on and they know the expectation that comes with it," he said.

"They trained excellently for 10 days and I didn't think self-belief was going to be a problem.

Blues hooker Damien Cook was heavily involved in the opening exchanges, knocking on from the kick-off, saving a try when he beat Dane Gagai to a Xavier Coates grubber kick in the sixth minute and crossing for the opening try 12 minutes later.

After absorbing three consecutive sets of tackles on their own line, NSW went the length of the field before Cook grubbered near the Queensland line and regathered the ball after it ricocheted off the back foot of Tino Fa'asuamaleaui and dived over to score in the 18th minute.

Blues must use loss as 'attitude adjustment' says Fittler

Queensland suffered a blow before kick-off when Brenko Lee failed a fitness test after the Maroons' arrival at Adelaide Oval, but it was NSW who were hit hardest by injury when Boyd Cordner and Cameron Murray were forced from the field midway through the first half.

Cordner, the Blues skipper, was taken for a HIA after copping an accidental elbow from Felise Kaufusi while attempting a tackle and was replaced by Murray but the South Sydney lock lasted just two minutes before limping off with a hamstring injury.

Fortunately Cordner was cleared to return as NSW were down to just one forward in their interchange rotation after the decision to carry Rabbitohs five-eighth Cody Walker on the bench.

While he was being assessed the Blues extended their lead after fullback James Tedesco chimed into the backline and combined with centre Clint Gutherson to create an overlap for winger Josh Addo-Carr to score in the 21st minute.

However, a 10-0 half-time lead was never going to be enough in Origin and the Maroons over-ran their NSW opponents in a high paced second half to score 18 unanswered points after the interval.

Kurt Capewell sparked Queensland's comeback with a tackle on Addo-Carr that forced Blues halfback Nathan Cleary to kick from inside his own 20-metre zone, before laying on a 50th-minute try for Brimson.

Rushing past Gutherson after receiving an off-load from Munster, Capewell kicked ahead for Brimson who caught the ball on the bounce and crossed untouched to put the Maroons back in the game.

Coates scored three minutes later to put Queensland ahead for the first time in the match after Gagai pushed off his centre opposite Jack Wighton and raced into the clear before drawing in Tedesco with a dummy and passing to his unmarked winger.

Captain Daly Cherry-Evans, who had missed an earlier penalty goal, converted from out wide to give the Maroons a 12-10 lead and Munster put them further ahead in the 66th minute after toeing ahead a loose pass from NSW winger Daniel Tupou and regathering to score.

Yet NSW refused to yield and Addo-Carr scored in the 76th minute to set up an epic finish to the match, which ended with Kaufusi in the sin-bin for a professional foul and Capewell watching from the sideline after aggravating a thigh injury.​ 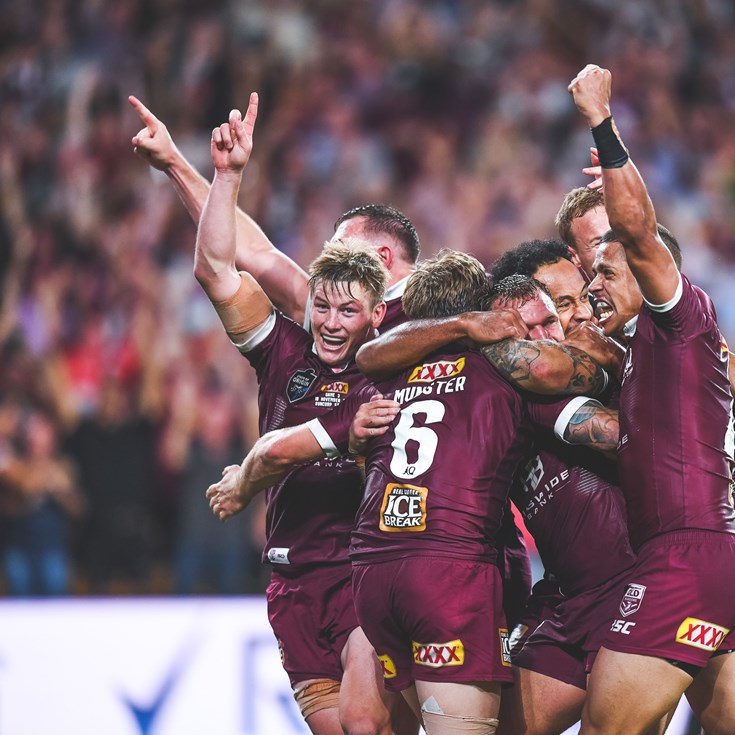