Billy Walters doesn't shy away from the fact he'd love to link with his dad, Brisbane coach Kevin Walters, at the club he's loved since he was a kid – but wants to do right by his current employers.

Targeting a Canterbury Cup return as early as round six, the injured Wests Tigers playmaker told NRL.com his first priority was getting back on the field while he is also prepared to fulfil his current contract through to 2022 at Concord if need be.

Walters said he had conversations with Tigers coach Michael Maguire and general manager of football Adam Hartigan over a potential switch to the Broncos.

"They've seen my point of view ... we were up front with each other and they told me they've made a lot of decisions around the club based on me being here like letting Josh Reynolds go and Benji [Marshall] from last year so I definitely don't want to leave the club on bad terms or leave them stranded for numbers.

"If they need to sign someone to let me go if that's an option or something, or if it's just play out the last year of my contract, I'm happy to do either. I just want to work with the club and make sure everyone's on the right page and happy.

"I've got one more year here. In terms of this year or next year I'm not really sure.

"I'd love to play for the Broncos, they were my junior club growing up and also having the coach there is another added bonus. For me, all I'm really worried about at the moment is playing.

"Just getting my knee back and trying to play some good football and then wherever that takes me, I'm happy to keep playing here."

Walters happily admits it's a good bad problem to have, being at a club that is reluctant to release you after plugging away for years in reserve grade just hoping to one day make your NRL debut.

"It's probably not a bad situation to be in where they're understanding of me maybe going back to Brisbane but they also want me at the same time," he added.

"Some boys unfortunately at times get told they're no longer needed and there's no club wanting them so I suppose I'm pretty lucky in that sense.

"I'm honestly happy either way to wait out here for another 12 months and see where that takes me or head back to Brisbane.

"I'm getting a bit older as well, I'm 27 this year and getting to that point where you can't really [be fussy], beggars can't be choosers so I've got to be happy with anyone that's willing to take me and let me be part of the squad."

On his recovery, Walters said it was going about as well as can be expected given the traumatic nature of the full ACL and MCL ruptures he suffered in August.

"I'm kind of at that point now where it's probably been the most frustrating because I feel like I can run and move and do a lot of things but I'm just not quite there yet so I've got to take my time," he said.

"It's been a long injury. There's no point rushing back trying to shave a couple of weeks just to do it all again.

"I'm probably three or four weeks away from rejoining the group and back into full contact then it's probably four or five weeks of doing that before I can start playing again so we're really close.

"I'm hoping around round six or seven as best case. If it keeps tracking the way it's going I think we can get there but obviously there's a few hurdles I still have to get over."

The club at least is fairly well stocked for options with Daine Laurie pushing Moses Mbye at fullback and Mbye capable of covering the halves where Adam Doueihi and Luke Brooks are form a union after Doueihi's one-game suspension or hooker where Jacob Liddle and Jake Simpkin are fit and raring to go.

"When I first get back I'll look at maybe trying to play the No.14 role, I've got a bit of versatility around me, I can play in the halves or at hooker and when I did my ACL I was actually playing at lock," Walters added.

"Not that I consider myself a lock but the way the game's changing there's a few ball-playing locks around so maybe I could do a role there if need be."

By the time Walters gets back on the field and builds some match fitness in Canterbury Cup then tries to force his way into the top squad that, adding 10 NRL caps to his resume would be a good result.

"Because I'm going to miss the first month or two the aim is probably going to be to play around 10 games, I'd be pretty happy with a year like that," he said.

"Hopefully I can try and weasel my way in the team somewhere and take it with both hands and try and hold that spot." 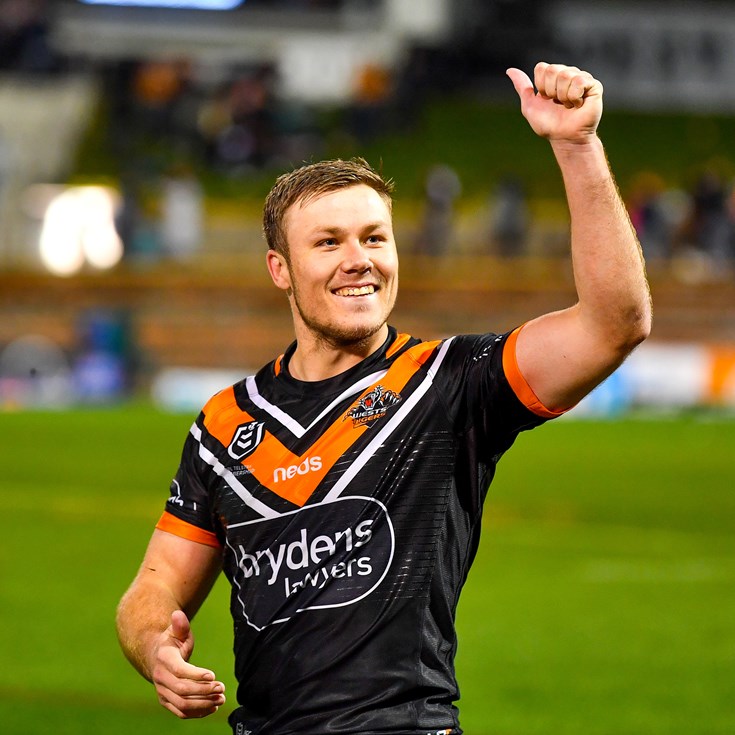