Interstate rivalry resumes on Friday night in women's Ampol State of Origin with current title-holders Queensland looking to retain the shield after their breakthrough win over NSW last year.

The Maroons and newly named Sky Blues return to Sunshine Coast Stadium for a second consecutive season after Queensland claimed a 24-18 victory last November to lift the shield on home soil.

With NRLW expansion given the green light and a possible World Cup at the end of the year, there is no better stage for Australia's best 34 female athletes to fire ahead of a jam-packed second half of the season.

Queensland could field 14 players from last year's victorious side for the match, although two remain under an injury cloud.

NSW will go into the clash as underdogs after surrendering the shield last season with 13 returning to seek revenge after tasting defeat.

Maroons: Two big inclusions for the Maroons an hour before kick-off with experienced duo Rona Peters and Tallisha Harden coming onto the interchange bench. Romy Teitzel drops to 18th player and Natassja Purontakanen drops out of the squad.

Ali Brigginshaw will play lock just as she did in last year's match, allowing Nellie Doherty medallist Tarryn Aiken to start in the halves alongside Zahara Temara.

The Maroons will also field the same backline as last year with Tamika Upton leading the way at fullback.

Sky Blues: The Blues will take the field 1-17 as named with Brydie Parker the 18th player and Renee Targett the last cut an hour before kick-off.

Prop Millie Boyle (concussion) and fullback Botille Vette-Welsh (leg) both trained on Thursday and will play.

Maddie Studdon returns to the halves alongside Corban Baxter after missing last year's match due to mixed form.

Sky Blues centre Jess Sergis has also moved back into the No.3 jersey after she played on the wing in the 2020 fixture. Sergis was battling an allergy early in the week after her hands reacted to the grass at the NSW Centre of Excellence and she was forced to train in gloves to protect them.

Tamika Upton v Botille Vette-Welsh: All eyes should be on the fullback battle between Upton and Vette-Welsh with the pair looking to secure the No.1 jersey for the Jillaroos at this year's World Cup in November.

Upton crossed the line for two tries against NSW last year, stepping her way past Vette-Welsh on the first occasion. However, Vette-Welsh bounced back to get around Upton for a try of her own late in the game.

Making matters more intriguing, the pair have had their injury setbacks this year with Upton managing a stress fracture in her back and Vette-Welsh a leg issue.

Both players topped the run-metre count last year for their respective sides.

NSW lead the Origin experience department with 31 games compared to Queensland's 19 for the match.

However, the Maroons' figure could increase to 24 if Tallisha Harden and Rona Peters take the field.

The match will be played in 35-minute halves again after a time increase was introduced last year.

Golden point will apply if the game is tied after 70 minutes, while the 40/30 will remain an option for kickers.

The six-again rule played in the NRL won't apply with penalties awarded instead for ruck infringements and foul play.

Women’s Origin tickets are on sale via NRL Tickets. Supporters can watch the historic match from just $5 for juniors, $15 for adults and $35 for families. 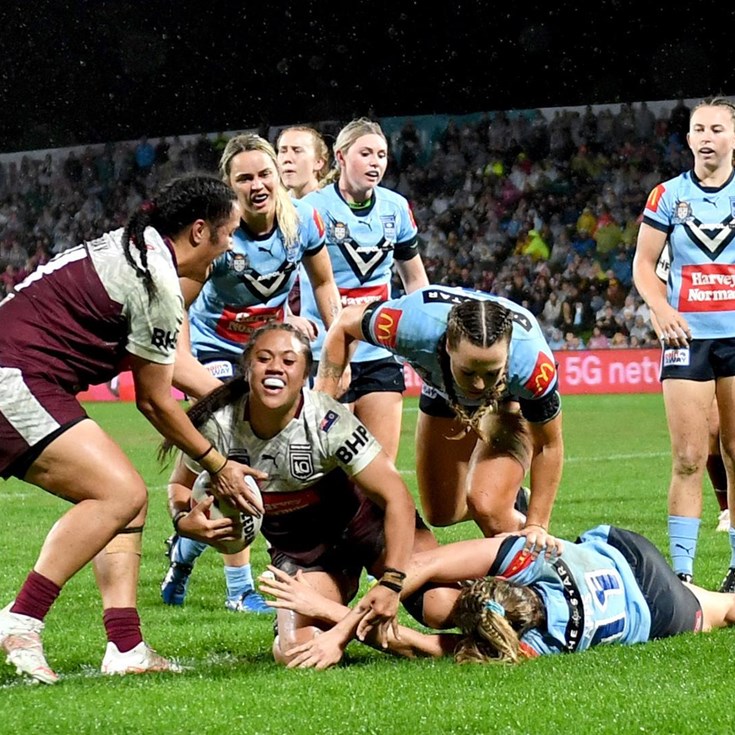