Even though he as a grasp on the Wests Tigers No.6 jersey for now, Adam Doueihi says only more wins will ensure he retains it.

Doueihi made a triumphant switch from centre to five-eighth on Sunday, setting up a staggering five tries as the Tigers ran away 42-24 NRL winners over Brisbane at Suncorp Stadium.

He had worn the No.6 jersey up until round nine before moving into the centres. On Sunday at Suncorp Stadium he was back in the halves.

Doueihi combined with fullback Daine Laurie to tear apart the Broncos' left edge as the Tigers ran in 32 second-half points - including the last four tries - to seal a much-needed victory.

It seemed Doueihi's days as a centre were numbered after a masterful display that helped the Tigers snap a three-game losing streak and keep the joint venture one win outside the top eight.

But Doueihi wasn't so sure after having five-eighth duties taken away from him already this season.

No wonder he wasn't taking anything for granted after his stellar display on Sunday.

"We hadn't been getting the results that we had wanted lately so Madge [coach Michael Maguire] wanted to make some changes again," said Doueihi, who had played the last six games in the centres.

"Luckily enough for me, I am back in the six jersey. It is a position I enjoy.

"It is my preferred position. I just wanted to keep it simple, play what I saw and just back myself - luckily enough it went our way."

Asked if he wanted to stay at five-eighth, Doueihi said: "I do - as long as we keep winning Madge will keep me there.

"The way I see it we are one from one now. We will look at what we can do against Manly [next round] and then go after them.

"But I thought we controlled the game well [on Sunday]. We wanted to attack through our right edge. We saw some real opportunity out there."

Doueihi nailed most of those opportunities with help from Laurie who came back from a nasty head cut that briefly sidelined him to kick-start the second half point spree with a 44th minute try.

Laurie set up another try, running for 172m with two line breaks and five tackle busts.

"He [Laurie] is so skilful. We set Broncos up by hitting the ball short early, and then when they started collapsing in used the long ball and Daino used his footwork out wide," Doueihi said of the gameplan.

As long as we keep winning Madge will keep me there

Adam Doueihi on staying at five-eighth

The win provided a respite for besieged coach Maguire who is under pressure due to the Tigers' inconsistent season.

Doueihi said the Tigers aimed to provide some job security for their mentor after vowing to make the most of their relocation to Queensland due to Greater Sydney's COVID-19 outbreak.

"We feel for him [Maguire]. We feel we let him and the organisation down," Doueihi said.

Too much speed from Laurie on the edge

"It's been a disappointing season so far but we have pushed it behind us.

"We sat down early this week [and decided] we wanted to make the sacrifice worthwhile for us [after moving north].

"We see it as a second chance. We want to look back and say we did ourselves, our club and families proud." 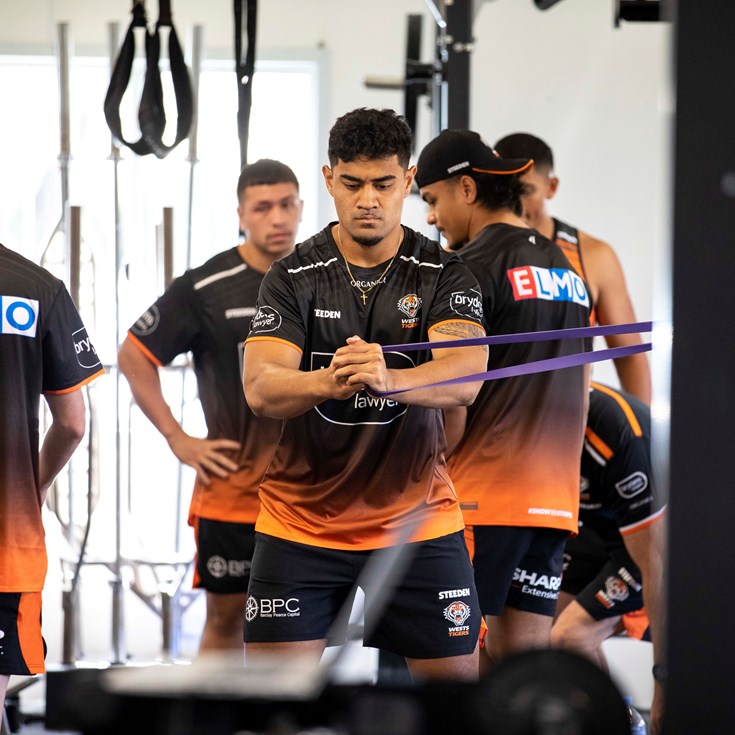