It all comes down to the final round for Wests Tigers, as they look to record their first finals appearance since 2011 when they take on the Canberra Raiders.

Needing to win against the New Zealand Warriors last week to keep their season alive, Jason Taylor’s men recorded a thrilling come-from-behind upset win across the Tasman to stay in the hunt for the top eight heading into the final match of the regular season.

To qualify for the finals, Wests Tigers need to not only beat the Raiders, but hope that the North Queensland Cowboys defeat the Gold Coast Titans in Townsville as well.

Given the Titans play Saturday night, Wests Tigers will know whether they are still alive heading into the match — potentially making Sunday one of the biggest games seen at Leichhardt in recent years, with a monster crowd expected to roll through the gates.

Wests Tigers will welcome back Chris Lawrence (shin) from injury in a huge boost for the forward pack, while Canberra will still be without Blake Austin due to his broken hand.

Sam Williams once again replaces him in the halves alongside Aidan Sezer.

Wests Tigers will be keen to amend their earlier season result against the Raiders, which saw them suffer a season-high 60-6 defeat in the nation’s capital. Much has changed for both sides since then, however, with Sunday’s game carrying a much different scenario.

It’s shaping as an absolute blockbuster encounter at the suburban ground on Sunday afternoon, with Wests Tigers ready for their most important match since 2011. Canberra come into the match unchanged from their last start win over the Manly-Warringah Sea Eagles, with Aidan Sezer named despite leaving the match with injury.

For Wests Tigers, Chris Lawrence (shin) returns in the forwards in place of Curtis Sironen, while Kyle Lovett's return from sickness sees Michael Chee Kam drop back to 18th Man. 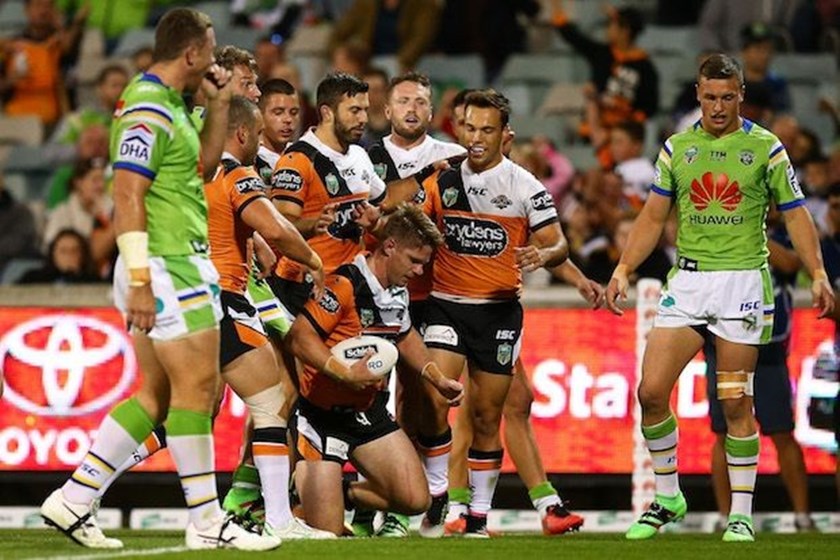 No side in the competition has scored more points than Canberra this year, and much of that has been down to the attacking prowess of the Raiders’ right edge. Joey Leilua and Jordan Rapana have been in career best form, and will pose a huge threat to the left edge combination of Tim Simona and Josh Addo-Carr of Wests Tigers — both of whom possess plenty of speed and attacking prowess. In his 21 games this year, the Samoan international has amassed 10 tries, 12 linebreaks, eight try-assists and a whopping 115 tackle breaks, the fifth most in the league behind Wests Tigers stand-in fullback David Nofoaluma (138).

Apps, Sergis, Vette-Welsh excited to get the band back together