Two of the competition’s toughest wingers will battle it out this Monday afternoon at ANZ Stadium as Wests Tigers’ David Nofoaluma and Parramatta’s Semi Radradra go head-to-head in this week’s Phil Gilbert Motor Group Key Matchup.

His team’s best player through the opening six rounds of the season, David Nofoaluma not only leads Wests Tigers in tries, carries and linebreaks, he also leads every player in the NRL with offloads (21) and tackle breaks (47). In fact, since the start of the 2016 season, no player has recorded more offloads and tackle breaks than Nofoaluma, whose stellar form was rewarded with an international debut for Samoa to end the year.

His direct opponent this week is no stranger to records and accolades either.

Since making his debut late in season 2013, no player in the NRL has scored more tries than Semi Radradra, with the representative winger crossing for 64 tries in 74 games.

After blistering 2014 and 2015 seasons, however, the Fijian and Australian international has seen somewhat of a dip in form by his lofty standards — crossing for 12 tries in 2015 and four this year, all of which came in Round 2 against the Dragons. Breaking that down further, and Radradra is only crossed for tries in three of his last 11 games.

Having said that, there’s no denying the sheer strength and ability of the 24-year-old, who will certainly be a handful for Nofoaluma and Wests Tigers come Easter Monday.

Don’t be surprised to see plenty of involvement from both players working the ball out from end, as well as finishing off attacking moves close to their opponents’ line. 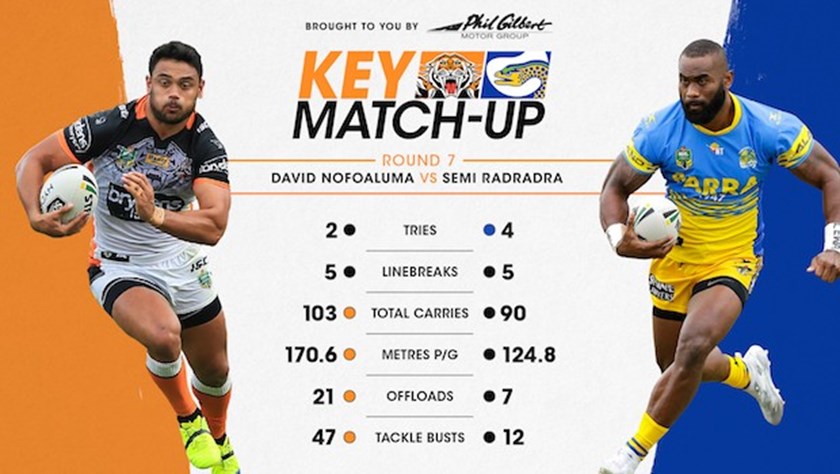 Both key attacking weapons in their respective sides, Nofoaluma has the slight edge when it comes to overall numbers so far in 2017 — leading Radradra in every attacking statistic this year except tries. As mentioned previously, Radradra’s four-try haul against the Dragons in Round 2 gives him a 4-2 lead over Nofoaluma, but it’s also worth noting that match was the only game Semi has scored in all season. Only Jordan Rapana has run for more metres this year than Nofoaluma with 1024m off 103 runs while Radradra sits well back with 749m off his 90 runs (13 highest amongst wingers). Despite a 4-2 disparity in tries scored, both players have broken the line five times already in 2017.

Both prolific try-scorers for their respective clubs, Nofoaluma and Radradra are working their way up their Club’s all-time top try-scorers at rapid pace. Nofoaluma’s 37 tries in 67 games has him sitting in equal 12th for Wests Tigers, with the winger requiring just two tries to level Brett Hodgson inside the top 10 on 39 tries. Radradra is already up to ninth on Parramatta’s list with his 64 tries in 74 games, just one behind Eric Grothe Jnr.

While Nofoaluma and Radradra are familiar with marking each other now, it could well be a new-look right edge for Wests Tigers that comes up against the Eels left side following Jamal Idris’ move to the right last week. With Kevin Naiqama and Moses Suli lining up on the left for the first time under new Coach Ivan Cleary — and to much success against the Cowboys — we could well see those combinations remain the same for this week’s clash. And if that is the case, Wests Tigers will have incredibly used their fifth different right centre-wing combination against the Parramatta Eels since 2014.

While Parramatta might not have the best record at ANZ Stadium — winning just five of their past 25 games at the former Olympic venue — Radradra is doing his best to buck that trend. In his fifth season playing at ANZ Stadium, Semi is still keeping him up his 100 percent try-scoring rate, with 12 tries in his 12 games at the venue. It’s worth noting, however, that of those 12 games, the Eels have won just five.

“Obviously my job is to play the best footy for the club. I play for the Wests Tigers now and I put everything into this team. I’m wanting to be a better player. I’m really loving the game at the moment and I’m enjoying every moment. It’s just about putting in all that extra effort I’’m here to put my best performance in for the team, that’s my thinking, I like to put every effort in.” — David Nofoaluma on his recent run of form

Presented By Elmo Software 14 hours ago

Presented By Elmo Software 14 hours ago

Presented By Awabakal 15 hours ago