With 10 brand new faces “on the bus” for the year ahead and a great mixture of youthful talent and experience in the midst, the team that takes to the field in Round 1 against the Roosters will be vastly different from the one that ended 2017 against the Warriors.

Next up, we look at one of the deepest positions for Wests Tigers in 2018 — the wing — where a number of players will certainly be putting their hand up for a spot in the team.

It’d take a brave man to predict against David Nofoaluma not starting on the wing for Wests Tigers come Round 1, so let’s kick off this list with the Campbelltown junior after another superb 2017 season. His strong running and finishing close to the line saw him emerge as not only one of the club’s best wingers, but the entire competition, and he’ll be out to improve again come 2018. Having had two sportsman hernias removed in the off-season, the 24-year-old will be even more free in his running and could play a bigger role in the attack with Tuimoala Lolohea floating out the back at fullback. And if that wasn’t enough, the return of Benji Marshall could lead to more of this from Nofoaluma…

Kevin Naiqama was somewhat a victim of his own versatility in 2017 — playing fullback, left wing, left centre, right centre and right wing all throughout the year. And while he certainly handled himself with aplomb in all situations, there’s no doubting that the Fijian international is far more comfortable out wide — ending the year as the club’s leading try-scorer with nine and an average of 107 metres per game. Likely to feature as a contender in the centres too, Naiqama seemed to have a spot on the wing locked down earlier in the year before Moses Suli suffered stress fractures in his foot, which pushed him back to the centres, so we might see the 28-year-old on the wing once more. His experience is certainly a boost to have in the side, with his career record of 25 tries in 46 games on the wing slightly superior to his numbers in the centres (18 tries in 42 games).

One of the new boys at Wests Tigers in 2018, Mahe Fonua leaves Hull FC as a firm fan favourite and certainly a contender for a spot on either the wing or centre in Ivan Cleary’s side. The former Melbourne Storm centre took his game to the next level in Super League — scoring 15 tries in his first season with the black and white to be named as part of the 2016 Dream Team, while also crossing in the 2016 Challenge Cup Final. If that wasn’t enough, Fonua then outdid himself the year later — grabbing two tries in the final as Hull FC went on to record back-to-back titles at Wembley. Fonua’s ability in the air makes him a dangerous target for Luke Brooks and Josh Reynolds, while his hard-hitting defence could make for an imposing force flying in off the left or right wing.

When Wests Tigers signed Malakai Watene-Zelezniak mid-season from the Penrith Panthers, few would have predicted him to have the immediate impact he did at his new club — especially given he had played just one first-grade game prior to the switch. However, the 26-year-old thrived in his new colours, and made the most of the opportunity handed to him by Cleary with six tries, four linebreaks and over 120 metres per game in the 13 games he featured for Wests Tigers. More importantly, Watene-Zelezniak looked better and better as the year wore on and will certainly come in to calculations for Round 1 having started pre-season trimmer and fitter than before. Superb under the high ball, Malakai is a strong carrier of the ball from his own end, and will certainly push some of the younger players in the squad for a spot in Round 1.

The baby-faced assassin, Moses Suli showed just how bright his future at Wests Tigers in his rookie year before stress fractures in his foot ended his year after 16 games. However, in those games, the 18-year-old — yes, remember he’s only that young — grabbed two tries, six linebreaks and over 128 metres per game. He also did enough to feature in the centres in the mid-year Pacific Test for a Tongan side that would go on to shock the world just six months later at the World Cup. While more of a centre than a winger, Suli showed he was capable of slotting in to either position in 2017 — debuting, in fact, on the wing — and it’ll be fascinating to see how Cleary uses the powerhouse teenager in his second season.

We mentioned Corey Thompson as a possible contender at fullback, and it’s equally worth noting him here as a contender for the wing following his try-scoring exploits over the past two years with Widnes. Playing as both a fullback and winger in his Super League career, Thompson showed great athleticism, versatility and vision in his way to the try-line — ending 2016 as the second highest try-scorer in the competition. While not the tallest man in the squad, Thompson possesses terrific skills in the air, and with NRL experience on the wing, will certainly be in the running for a spot come Round 1. 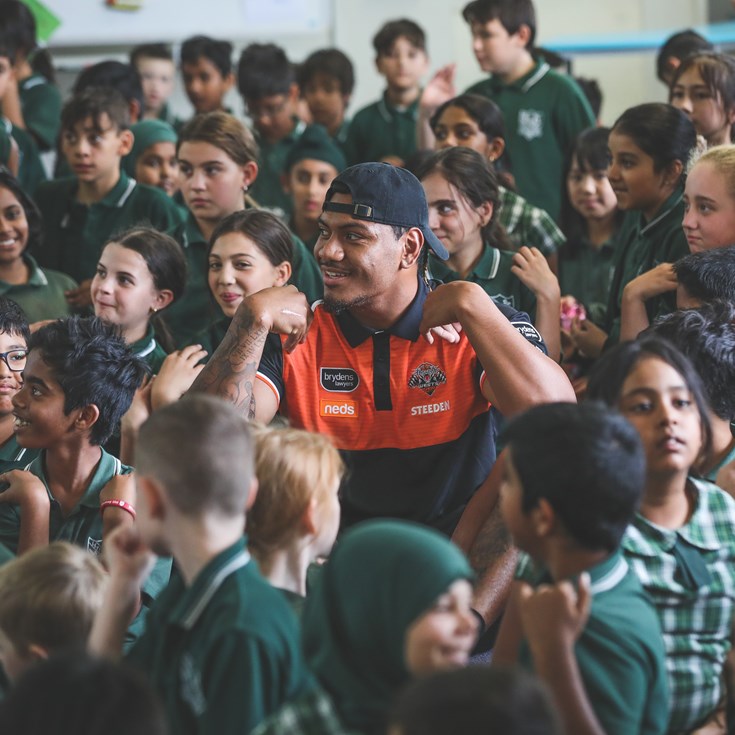