After a thrilling first-up win over the Sydney Roosters, Wests Tigers will look to slay another giant tonight when they take on the Melbourne Storm at AAMI Park.

The discussion all week has been around the special milestone for Storm fullback Billy Slater as he celebrates his 300th career game, and that might just suit Ivan Cleary’s men perfectly fine as they carry the underdog status with pride in to tonight’s encounter.

With plenty of storylines around, we pick out the five you’ll want to keep an eye on…

1. How will Wests Tigers fare without Tui Lolohea?

After picking up a minor knee injury during the week, Wests Tigers will head in to tonight's match without fullback Tuimoala Lolohea, who was the man of the moment in last week's win over the Sydney Roosters with his clutch sideline conversion. His omission sees David Nofoaluma come in to the squad, and it'll be interesting to see how that change affects the side. With the squad as is, Corey Thompson is perhaps the most likely contender to switch to the back but Kevin Naiqama is also capable of playing fullback if needed given his time there for Fiji. Should it be Thompson that moves to the back and Nofoaluma to the right wing, it'll be interesting to see how that affects Wests Tigers attack; Thompson was superb at fullback in both trial matches and offers plenty of spark right across the park that will be needed against the Storm. Ironically, Thompson perhaps knows his opposite number in Billy Slater better than most, with the pair training together in 2012 as the now Wests Tigers man went through pre-season in Melbourne. Hopefully that time together will bring out the best in Thompson as Wests Tigers look to spring an upset later tonight!

2. What impact will that have on the team’s goal-kicking?

He was the hero last week with his sideline conversion to win the game against the Roosters, and Lolohea's exit from tonight's game will seemingly create a hole in terms of goal-kicking for Wests Tigers. Given he was the understudy throughout the trial matches, you'd think that Esan Marsters is the most likely contender to fill those shoes tonight, although Benji Marshall is certainly more than capable of slotting them if needed — after all, he has kicked more goals than any player in Wests Tigers history. Should tonight's game be a close one, however, goal-kicking will certainly be an important thing for both teams and Marsters' ability to slot them when needed might just be the difference between winning and losing.

3. How will the trip back from Perth affect Melbourne?

It's perhaps been lost in all the hype of Billy Slater's 300th, but as clinical as the Storm were in their season opener, they have had to deal with the arduous trip back from Optus Stadium in Perth in preparations for tonight's game. Melbourne are certainly used to the travel with games in Sydney and Queensland all year, but the five-hour flight back (plus the time difference) from Perth certainly isn't an easy thing to contend with — something which captain Cameron Smith alluded to in discussions with the media this week. Melbourne will certainly be up for the contest as they always are with milestone matches, but again, if this is a contest that goes right down to the final minute, will those heavy legs turn out to be a telling thing?

Ivan Cleary sprung somewhat of a surprise last week when Ben Matulino dropped back to the bench in place of Matt Eisenhuth, who was promoted to the run-on side. It certainly worked as a tactic as Matulino's inclusion in to the match negated the impact of Dylan Napa off the bench, but it'll be interesting to see whether that change happens again or if it was a once-off for last week's match. Will we also be in for a late change too with Josh Aloiai, who has been retained in the squad as he makes his return from injury? You'd think that Matt McIlwrick is locked in given his rotation with Pita Godinet, and Alex Twal too as a specialist prop, so it might come down to Eisenhuth, Aloiai and Michael Chee Kam for the final two spots on the bench given Tim Grant (jersey 20) didn't travel with the squad to Melbourne. How the final make up of that bench will be is certainly an interesting one to watch out for when the team lists are in.

When the draw was released pre-Christmas in 2017, it was clear that the start to the year was incredibly tough for Cleary's men — taking on last year's top four and the premiers twice inside the opening five weeks of the year. It was something that had never been done before and while many expected that Wests Tigers would struggle in the opening rounds, they did the opposite to start the year with a win over the Roosters. With just one win in Melbourne since 2000, it'll be another incredible upset for Wests Tigers should they take down the Storm and move to 2-0 on the year, but crazier things have happened. As Cleary said late last week, the team can only play one match at a time, and that attitude is perfect for the situation that sits ahead of them. Tonight, they will look to take the next step in that tough start to 2018. 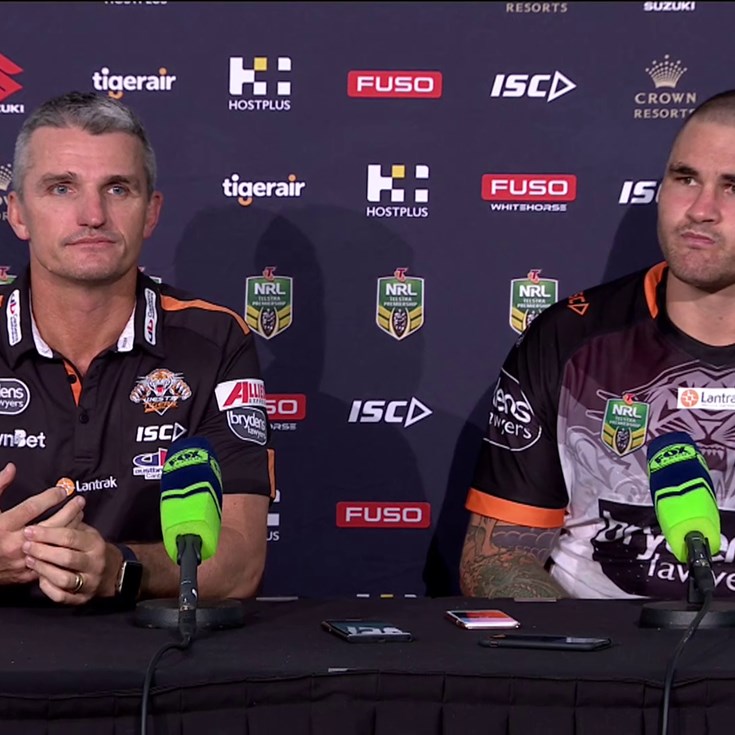 Meet the team in Melbourne!