After preaching the need for an 80-minute performance, Wests Tigers Coach Michael Maguire was certainly pleased with what he saw in his side's strong 34-6 win over Canterbury-Bankstown tonight.

Having watched his side go behind early, it was one way traffic for Maguire's men as doubles to wingers Tommy Talau and David Nofoaluma ensured it would be a memorable night for Maguire — in his 100th win as a coach — and Wests Tigers, in what was the joint-venture's 500th game since foundation.

The result sets up a mouthwatering clash for Wests Tigers next week against the in-form Penrith Panthers — the first chance for Wests Tigers Members to witness their team live this season after confirmation of reduced crowds returning in Round 8.

“That’s the 80-minutes we’ve been talking about," Maguire enthused after the game.

"But it's all about how you back it up.

“It’s what you do next that is the big thing that matters to all of us.

It's all about how you back it up. It’s what you do next that is the big thing that matters to all of us.

“The fact we’re able to do the things we spoke about is really good.

"Consistency is the thing I'm most proud of [but] it's going to be a different challenge next week."

Freakish effort from Talau gets him a double

Having lost Robert Jennings (hamstring), Alex Twal (knee) and Zane Musgrove (foot) the week before, Maguire was quick to praise the performances of several players in his side and their increased role under pressure.

"Tommy Talau is a quality kid [and he showed it] in the way he finished that try," Maguire said. "He’s probably played more in the centres and the back row [but] I put him on the wing a couple weeks ago and he shined for us.

"He’s found a spot there which is good,” said Maguire.

“The Leilua brothers are definitely building combinations out there — they've been playing strong football.

Boys loving this one! 🙌🐯

“We had a couple new guys come in to the forward pack to fill in last week’s injuries. Something we’re trying to build here is whoever may not be there that someone comes in does their job. Oliver Clark came in tonight and Matt Eisenhuth started and that was pleasing. Elijah Taylor came on and did a great job for us.

With two enthralling contests — albeit with different scorelines — against the Panthers in 2019, Maguire said he was excited for the challenge ahead on Saturday.

"We now need to be able to maintain what we’re working on here tonight and build on that next week," he said.

"We know the quality of the team they are.

"It’s about what we do and the things we do this week to make sure we can build and back up what we did tonight.

“I feel this team is better than where it is at this present moment, but at the end of the day it shows where we are on the ladder. We need to change that as a group, and we took a step towards that tonight.

"I’m looking forward to next week to see how we build upon that — that’s what in front of us next.” 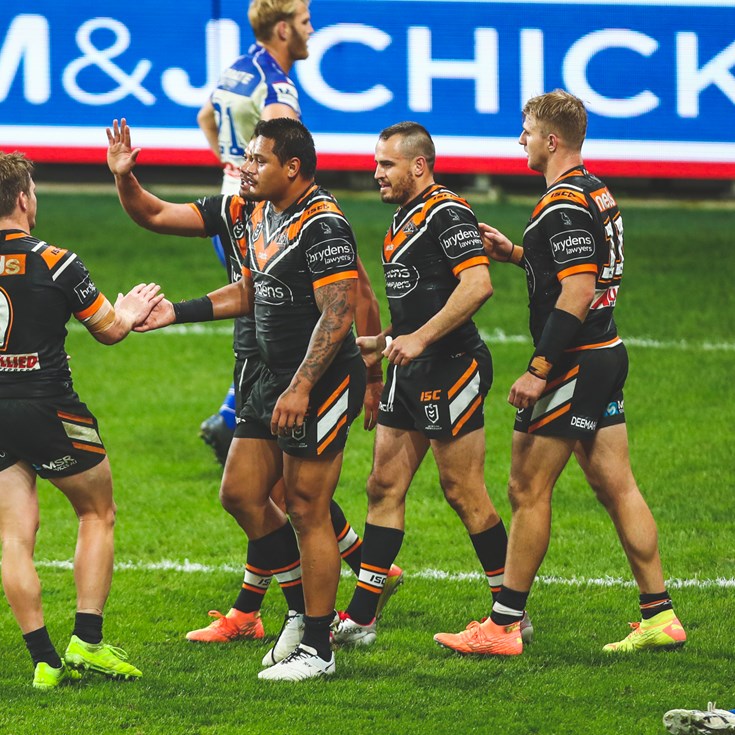