Wests Tigers Jersey Flegg have extended their unbeaten streak to start the year with a 28-24 win over the South Sydney Rabbitohs.

After letting a healthy lead slip late on last week against the Canterbury-Bankstown Bulldogs to see the match finish as a draw, Wests Tigers ensured lightning would not strike twice — seeing out the match to finish as four-point winners.

The win sees the unbeaten Wests Tigers move to outright second on the ladder ahead of next week's clash against the eighth-placed Sea Eagles on ANZAC Day.

Eli Morgan got the hosts off to a perfect start when he crashed over inside the opening two minutes of play but it certainly wasn't all easy for Wayne Lambkin's side, who were made to do a mountain of defensive work early on.

Elifasa Leiliua extended the visitors' lead when he backed up a good break from Ben Stevanovic against the run of play — taking the score to 12-0 — before South Sydney hit back through Peter Mamouzelos after 21 minutes.

Having defended their line well to preserve a six-point lead heading into the sheds, a quick-fire double to winger Liam Scolari after the break quickly put the game beyond doubt as Stevanovic's eagle-eye kicking from the sideline pushed the lead to 24-6.

Logen Dillon's break was capped off with a clever effort in the corner from Okusitino Lui to push Wests Tigers further in front, before the Rabbitohs hit back through Tevita Taumoepenu to offer the home fans a glimmer of hope.

Gordon Whippy's try with seven minutes to go had Wests Tigers nervous after last week's late meltdown against the Bulldogs, but there would be no such comeback this time around from the Rabbitohs despite a try from Cameron Akauola Laula, with the visitors holding their nerve late on to see the match out. 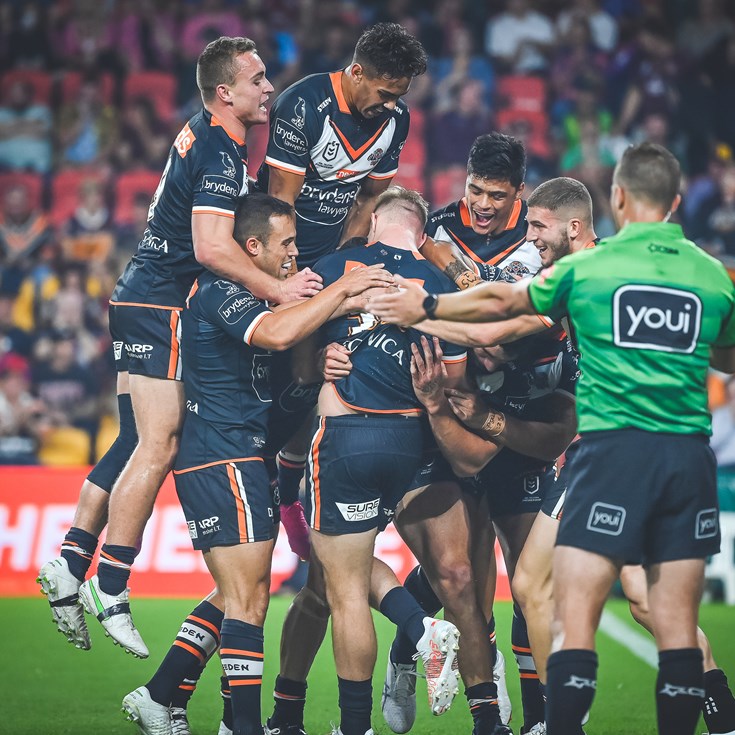 Wests Tigers bring the magic with victory over Newcastle