Wests Tigers women's program continued to reach new heights on and off the field in 2021 as the club strives to increase female involvement in sport, whether that is as an athlete, volunteer, member of the community or employee.

As the NRL celebrates the annual Women in League Round, Wests Tigers wanted to take time to look back and reflect on the growth across the women's program in 2021 and look forward with eager anticipation for what's to come.

Following on from the end of the 2020 season in October, Wests Tigers were quickly back to action in preparation for 2021 with its Talent Identification Day for female athletes eligible to play in the 2021 Harvey Norman NSW Women's Premiership.

A strong contingent of players gathered at Hillier Oval in Liverpool to stake their claim for a place in club's senior women's side, with experienced squad members helping the coaching staff and participants on the day.

Several attendees from this day did earn selection and make their way to the squad and eventual debuts for the club later in the year — more on that to come!

As squads for both the NSW Women's Premiership (open) and Tarsha Gale (U/19) teams returned for training in the lead up to Round 1, Wests Tigers players would show their class on the representative stage — Raecene McGregor, Page McGregor and Botille Vette-Welsh all starring for the Maori All Stars as they chalked up a dominant 24-0 win over the Indigenous All Stars in February.

That would set the tone for a strong year ahead on the field for both the senior and junior women's teams, as the club also began to take enormous strides off it too with the launch of the game-changing Wests Tigers ROAR Academy.

The first of its kind among NRL clubs, the ROAR Academy is an extensive program that aims to support women’s players from the U/13’s through to U/17's — opening up opportunities for women’s players to progress from the junior grades of Wests Tigers right through to the current senior competition, and eventual NRLW team.

As the club strives towards inclusion in the 2023 NRLW competition, this Academy and development over the coming years can ensure that its elite women's program will be supported by local juniors and players who have come through the club.

Within a month of the program officially launching, Wests Tigers were already seeing the first signs come to life with an Academy Talent Identification Day.

Back the field, it was a bright start to the season for Wests Tigers as eight new players earned their senior debuts in Round 1 — helping the side to a dominant 54-4 win over Cabramatta that set the standard for what was to come.

Both the senior and junior women's teams would again qualify for the finals series — the Tarsha Gale girls going down in a close Elimination Final loss to the Dragons while the women were unable to play their knock-out final due to COVID.

Importantly, not only did the club see a number of players progress through the junior squad to the senior side in 2021, but its Members and fans did too. Three NSW Women's Premiership fixtures (Round 9, 12 and 13) were played as curtain-raisers to NRL games, with the women winning on all three occasions.

Representative honours continued to flow for Wests Tigers players, who were selected in teams right throughout the season including NSW City Origin, NSW U/19's Origin and NSW Women's State of Origin as well as the Australian Defence Force and QLD Sapphires at the Harvey Norman Championships.

Unsurprisingly, more Wests Tigers women are also expected to earn selection in the expanded NRLW competition this year which will begin in October.

As important as its on field success has been this year, Wests Tigers are equally proud for its continued inclusion and celebration of women away from the field.

Women's players have done a tremendous job assisting the club in various community programs, while also being heavily involved in the launch of two prominent jerseys this year — the ANZAC strip (worn below by serving defence force member Ash Makim) and the Women in League jersey.

This year marks the first time since 2014 that Wests Tigers have had a Women in League jersey, with Wests Tigers women also playing in the jersey when they took on Glebe earlier this year at Campbelltown Sports Stadium.

The pink tiger across the front of the jersey represents females across every part of the club — both internally, with staff, players and their partners, as well as externally with the vast array of Wests Tigers Members, fans, corporate partners and donors. 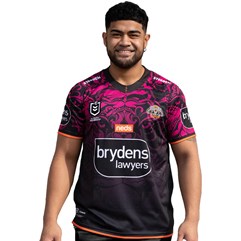 The shared jersey design between our two senior teams also highlights a further step in breaking down gender barriers in rugby league — recognising all who pull on the Wests Tigers jersey simply as Wests Tigers players.

Wests Tigers are incredibly proud and thankful for all of the players, officials and volunteers who have assisted in the growth of its women's program in 2021 and look forward with great expectation for what's to come in the years ahead.

Match Report: Round 22 vs Cronulla Sharks