With over 10 brand new faces “on the bus” for the year ahead and a great mixture of youthful talent and experience in the midst, the team that takes to the field in Round 1 against the Roosters will be vastly different from the one that ended the 2017 season.

Next up, we look at the players in the running to feature at five-eighth…

The clear front-runner for the seemingly vacant number six jersey is new recruit Josh Reynolds, who joins the club in 2018 after a long and successful stint at the Bulldogs. Since his debut season in 2011, Reynolds has guided the Bulldogs to two Grand Final appearances, and has featured in a number of representative matches — the most notable of which being the 2014 State of Origin series for New South Wales. In fact, the 28-year-old remains the last Blues five-eighth to win an Origin series. An athletic playmaker who oozes with passion and determination, Reynolds’ short kicking and running game are both vital weapons for his team’s attack and it’ll be fascinating to see how his combination with Luke Brooks brings out the best in both players next year.

We shouldn’t need to go in to too much detail as to why Life Member Benji Marshall is a contender for this position — simply pointing out that the Kiwi international’s return to the club is far more than just a sentimental move. Marshall has been clear about his intent to contribute on the field, and given his experience and strong recent form with the Brisbane Broncos, there’s no doubting the 32-year-old’s ability to do just that. Having already played with Luke Brooks in the then rookie’s memorable debut game, it’ll be fascinating to see how Coach Ivan Cleary uses Marshall at Wests Tigers in 2018.

The only player in Wests Tigers 2018 squad yet to make their debut this year, Tyson Gamble joins the club after a superb first season in the Intrust Super Cup with the Redcliffe Dolphins — taking the underrated side all the way to the Grand Final qualifier. A tall playmaker who enjoys taking on the line, Gamble has thrived in his first full pre-season with the club and will certainly be looking to force his way in to the squad throughout the 2018 season — particularly given his pre-existing combination with someone like Marshall, whom he played in the halves with at Redcliffe earlier this year.

Pita Godinet was the most recent player “on the bus” at Wests Tigers ahead of the 2018 season, with the 30-year-old’s signing confirmed at the end of the 2017 Rugby League World Cup. Despite only playing 61 career games in the top level of Australian and English rugby league, Godinet is a vastly experienced player, with 13 appearances for Samoa over eight years. Moreover, Godinet is a clever playmaker capable of playing any position in the spine, and will certainly provide great cover at fullback, hooker and either position in the halves for Wests Tigers over the course of the 2018 season.

We mentioned Tuimoala Lolohea as the likely front-runner for the vacant fullback spot in 2018, but it’s worth noting that should Coach Cleary look for an alternate player in that position, Lolohea could likely come in to calculations in the halves once again. Arriving at Wests Tigers midway through the 2017 season, Lolohea’s combination with Brooks in the halves grew throughout the course of the season, and his form with Tonga in the World Cup led to a stunning endorsement from Marshall about his talent. Lolohea has played in the halves on an international level for both Tonga and New Zealand, and has played 15 club games in the number six jersey as well — scoring five tries. It seems likely that the 22-year-old will feature out the back for Wests Tigers in 2018, but should he not, he’s definitely still an option to consider at five-eighth given his recent form. 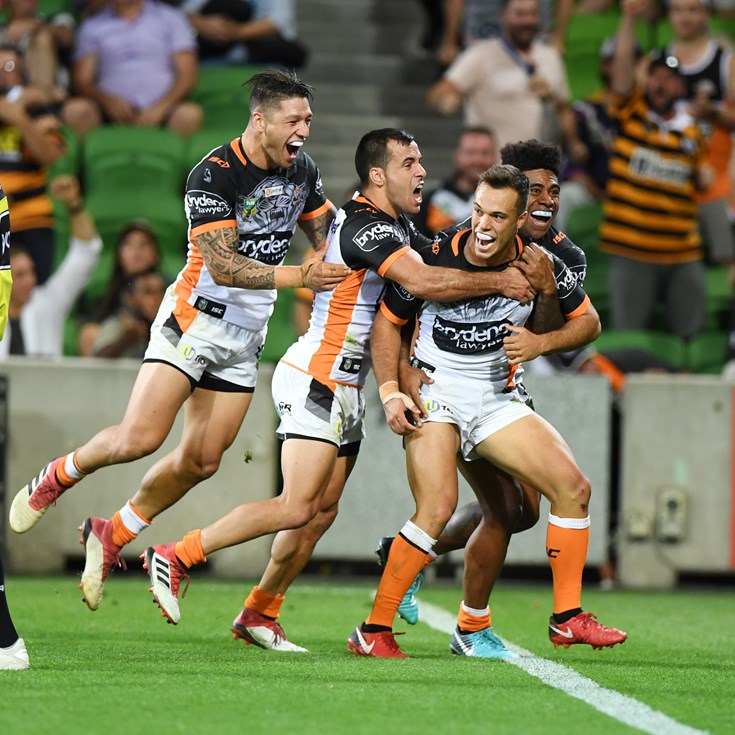 The "other" side of Grub