Wests Tigers proved their own worst enemy on Sunday with a number of attacking chances going to waste in a frustrating defeat to the Gold Coast Titans.

In front of a sellout crowd at Leichhardt Oval, the home side were by far the better side with ball in hand and created a slew of attacking opportunities, but were unable to take full advantage of their superiority with the final pass continuing to elude Ivan Cleary's side when they needed it most.

Ash Taylor did his Origin claims no harm with a number of solid touches, but it was a case of the Titans dominating field position and territory off the back of a number of close penalties and errors — helping the visitors shut out Wests Tigers in the second half to emerge with a surprise 30-12 victory.

The loss sees Wests Tigers remain in 10th spot on the Telstra Premiership ladder heading in to the bye next weekend, with a crucial three-game gap between them now and the eighth-placed Brisbane Broncos.

After a fast and furious start from both teams, it was Moses Mbye who came up with the first meaningful play of the game with a brilliant try-saver to deny the Titans a certain four-pointer off an AJ Brimson kick.

And off the back of it, the home side would go the length of the field through Kevin Naiqama to score the opening points — the centre running a lovely set move to cap off the set play from Chris Lawrence.

The Gold Coast would hit back soon after to level the match as Ryan James crossed for this third try in as many weeks, with Michael Gordon converting from in front to take the score to 6-6 after 20 minutes.

Playing in his first match at Leichhardt Oval, Josh Reynolds would have the home crowd on their feet with a blistering run from halfway, twisting and turning defenders inside out before scoring out wide.

Esan Marsters' second conversion of the day from out wide took the home side back out by six points, but off the back of a string of penalties, the Titans once again levelled the match as Ash Taylor continued to press his claims for a State of Origin debut in Game III of the series next week in Queensland.

Having already been denied by the Bunker once in the game, Corey Thompson looked to have restored Wests Tigers' lead when he grounded a clever kick in behind from Reynolds, but the try was remarkably overturned on review by the officials with Thompson ruled to have impeded Titans winger Philip Sami.

A shift left soon after had Malakai Watene-Zelezniak in space, but his attempted hit-and-spin saw him ground the ball agonisingly short of the try-line – leaving the scores level at 12-all at the break.

Wests Tigers would come out of the blocks firing in the second half and probably should have taken the lead when Robbie Farah and Luke Brooks combined on the left, only for the halfback to just get run down.

It was the same on the opposite flank too, as Reynolds and Michael Chee Kam combined to put Marsters in space, but the pass on the inside just went to ground with the try-line seemingly open for the centre.

Those missed opportunities would prove crucial for Wests Tigers as the Gold Coast continued to dominate field position with a high possession rate, and soon took the lead off the back of a questionable ruck penalty from Marsters — giving the visitors a lead they would not relinquish for the rest of the day.

AJ Brimson would grab the second try of his career in the ensuing set from that penalty after a deflected kick fell in to his arms, before Anthony Don put the game beyond doubt with a length-of-the-field effort eight minutes from time. Josh Aloiai's incredible chase kept Don's try in the corner and Gordon's attempted conversion wide — keeping the score at 24-12 — but it would purely be semantics as more wasted chances in attack on both wings allowed the Titans to work the ball down field and cross for one final try.

Jai Arrow's late effort took the scoreline out to 30-12 in favour of the Titans as the full-time siren sounded. 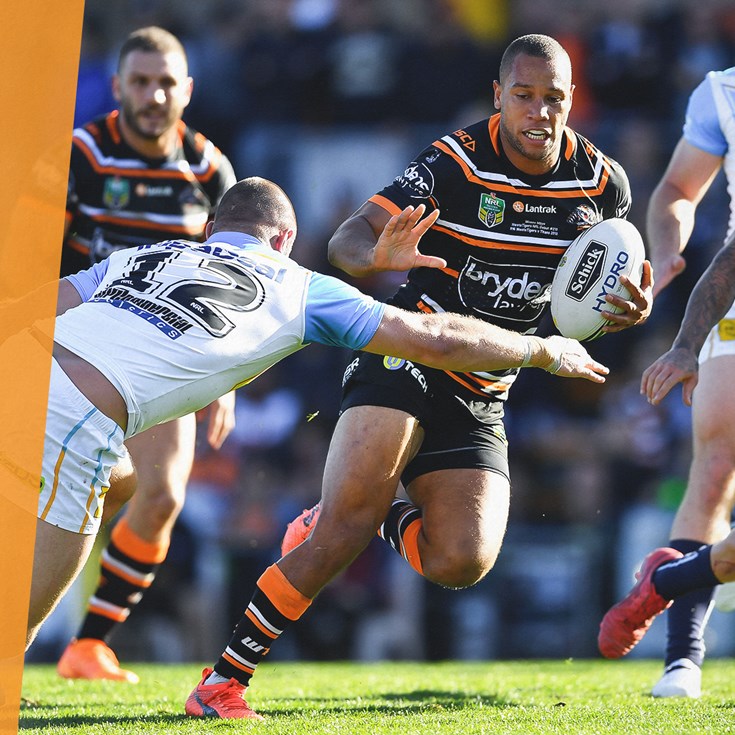 By the Numbers: Round 16