Michael Chee Kam’s second try of 2019 capped off a terrific night for Wests Tigers on Thursday as they fought back from an early deficit to defeat the Brisbane Broncos 22-16 at Suncorp Stadium.

Down 8-0 midway through the first half and fortunate not to be further behind after a number of missed opportunities on both sides of the ball, Chee Kam’s try assist for Luke Garner got the visitors back in to the contest before his mazy run through the Broncos defence securing a thrilling win with just over a minute remaining.

After the heartbreak of last week’s Golden Point defeat to Penrith, the performance was the perfect response from Michael Maguire’s side, who temporarily move back in to the top four after a number of impressive performances to start the season.

Ever since his memorable debut game in 2013, Wests Tigers fans have been vocal about the belief that Luke Brooks is at his best when running the football, and there was certainly no disagreeing with that fact after Thursday’s game. After a challenge from the Coach to take the line on more, Brooks produced 158 metres off 20 runs, including a linebreak, a try assist and four tackle breaks. In his career, Brooks has now run for 110 metres in a game on nine occasions for just one defeat — a Golden Point loss to the Bulldogs in 2016 at the hands of now teammate Moses Mbye. As it stands, Brooks’ running metres for the season are at a career-high 104m per game.

His numbers might not always jump off the page in terms of statistics, but Josh Reynolds again proved his importance to the team on Thursday night with his short kicking game. Having set up two tries last week off deft kicks, the energetic playmaker caused the Broncos all sorts of problems again at Suncorp Stadium — forcing several repeat sets off both his left and right foot. Reynolds only kicked six times during the game, but still amassed over 200 kick metres and two forced dropouts as his combination with Brooks, Moses Mbye and Robbie Farah around the ruck continues to improve each week.

Alex Twal’s promotion to the Wests Tigers run-on side for Round 1 certainly raised a few eyebrows, with the Lebanon international selected ahead of several more experienced players, but there’s no doubting that Maguire has certainly made the right call given his start to the year. One of the best tacklers in the game with just four missed tackles all season, Twal played the opening hour of the contest straight with great effect — running for 119 metres while adding an incredible 58 tackles. The young prop has reached 100 metres in every game this year while averaging 40 tackles per game at a 95.3% completion rate, and only looks to be getting better with every appearance.

Wests Tigers had not won a Thursday night game in club history prior to the Round 5 clash with the Broncos, and they also hadn’t come from behind to win at Suncorp Stadium since 2003 — both streaks that were ended thanks to Chee Kam’s miraculous try to win the game for his side. Once a tough place to travel, Wests Tigers have won four of their past five games in Queensland and will head their twice more in season 2019 as they take on the Panthers as part of the NRL Magic Round in Round 9 before travelling up to Townsville in Round 14.

It was a tough night for Kiwi international Esan Marsters last week with two missed conversions and a missed penalty goal leaving many wondering what could have been with the Golden Point loss to the Penrith. Heavily criticised, Marsters silenced the doubters with a perfect night with the boot as he kicked all three conversions and two penalty goals to ensure his side remained in the contest and were able to secure the win. Wests Tigers trailed 8-6 early in the second half and had a potential shot for goal to tie the match from the sideline, but there was no hesitation from the youngster who stepped up on his non-preferred side to slot the goal — much to the delight of Wests Tigers fans.

While important given the context of last week’s defeat, getting the two points was also crucial for Wests Tigers as they embark on a tough stretch of away matches and home games away from home. Having played three home games at the club’s suburban grounds to start the year, Wests Tigers don’t have a home game in Sydney now until Round 13 — after their first bye — with only two home games between now and then. Those “home” games are in Tamworth and Brisbane respectively, while the side will also play road games against the Eels, Roosters, Storm and Rabbitohs before eventually returning home to Bankwest Stadium in Round 13 to face the Raiders. With a run of home games coming up from then, there’s certainly a chance for Wests Tigers to solidify their standing on the ladder should they still be in touch with the top eight by then, so getting the job done in Round 5 and adding another two points to the tally will certainly go a long way! 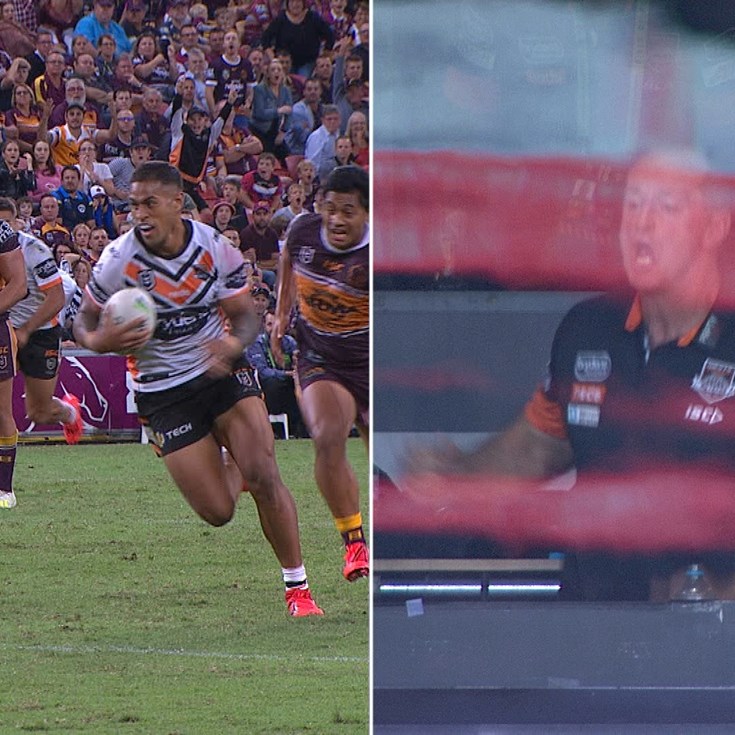